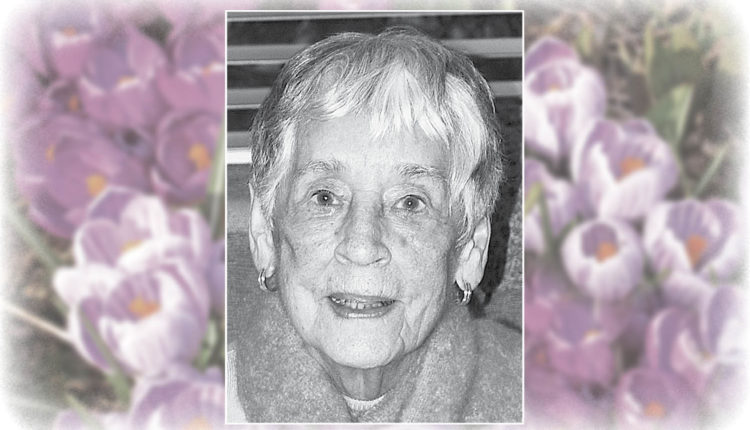 Eileen Mary Botham, 95, of Salt Spring Island, passed away peacefully Aug. 11, 2017 at the home of her youngest daughter, Mary Howard in Salmon Arm.

Born Nov. 4th 1921, in Ladner B.C. to Ray and Ida Hutcherson, Eileen spent her early years in Oregon, moving back to Ladner with her family at the time of the Great Depression in 1929 where her father set up the Home Oil Co.

In 1943 Eileen married Arthur Douglas Botham whom she met while the two worked at the Bank of Montreal in Cloverdale. With their three daughters, the family moved to rural Maple Ridge in 1958 where they lived until Art’s retirement from the lumber industry in 1980. At the age of 60 they settled into their newly constructed home and Island life on Scott Point, Salt Spring Island.

Protestant ethic values of individuality, integrity, frugality and self-reliance heavily influenced all areas of Eileen’s life. She was an avid reader and lifelong student of philosophy, history and economics.  Eileen was soon making her way “up the hill” in Burnaby, to study at Simon Fraser University when it opened its doors to 2500 attendees in 1965.

A woman of great curiosity, wit and intelligence, Eileen accumulated respect and friends throughout her life. She researched and chronicled a social history of her Kirkland-Hutcherson family. Her letters routinely included the sentient qualities of household pets, creating quirky personalities and much laughter. She was a talented seamstress, passionate amateur artist, intimidating bridge player, debater of politics and world affairs. She leaves a legacy of commitment to social justice and volunteerism. She was a member of the Raging Grannies and Amnesty International, a supporter of the Nature Conservancy of Canada, a volunteer with the island Hospital, Salt Spring Seniors and Library, a longtime book club and KAIROS member. She immersed herself fully in the Salt Spring ethos.

She loved tennis and golf, spending many hours at both the Pitt Meadows and Salt Spring Island courses. A Senior Ladies’ golf Captain and club champion.

Eileen was predeceased by her husband, Arthur (2003). She is survived by her brother Bill Hutcherson, three daughters, Nancy Botham, Holly Horwood and Mary Howard, seven grandchildren and three (soon to be four) great grandchildren.  To her family, she passes on the words of Albert Einstein: “The only thing you absolutely have to know, is the location of the library”

No service by request. In lieu of flowers, please consider a donation in Eileen’s name.