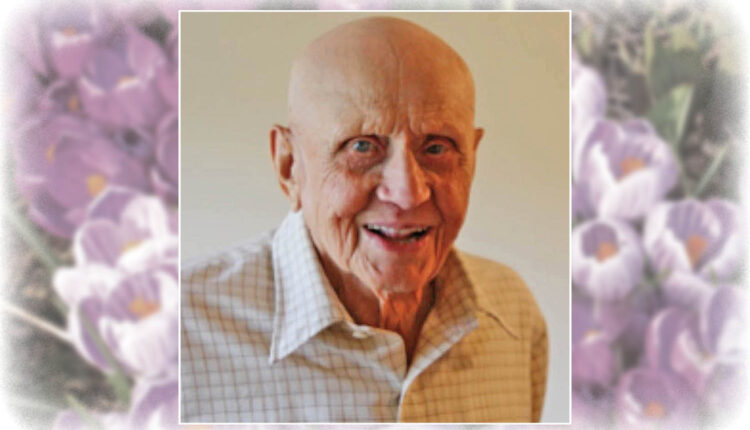 Harold died rather suddenly from an Aortic Aneurysm. He walked to Lady Minto on the Wednesday, and whilst in Emergency complained of chest pains, finding out he had an Aortic Aneurysm Dissection from a CT scan on the Friday, and he died on the Saturday. He was 101 years old.

Harold Conrad Blanes was one of 11 children born to Norwegian parents, Inge Helene and Edwin Conrad, who eventually settled in the Peace River Country of Alberta. Harold was very proud of his homesteading family and their self-sufficiency, which included building their house from logs cleared from the land they farmed, and growing or foraging/hunting most of their food. The only money they had was from the sale of butter made by his mother, turkeys sold at Christmas to pay for presents; and pelts from their hunting and sold to the Hudson Bay Company. Harold amusingly continued to refer to the shops he liked to frequent as his “Trapline”. Harold was as sharp as a tack and everyone, of all ages, loved to hear his stories and recollections.

A proud veteran of WWII, Harold received numerous medals, including France’s highest honour, the French Legion of Honour, for his participation in the liberation of France. After the War, Harold worked for Mannix on coal mining in the Crowsnest Pass, then on the Trans Mountain Pipeline in the late 1940s to the early 1950s, then for the Canadian Western Natural Gas Company in Calgary for 26 years, retiring in 1981. He spent his last 32 years in British Columbia, first in Peachland, and for his final 3 years on Salt Spring Island, spending 2 1/2 happy years at Heritage Place, where he was loved by residents and staff alike, and many of his final wishes were granted, including being served the BEST liver and onions made by the manager, Sandi Muller.

An unfulfilled wish was to finally have a resolution to the corruption he was a victim of by the investment industry of BC and Canada, where he was mistreated by two investment companies as well as the government appointed regulators. He was tormented by this injustice to his dying day.

Predeceased by his beloved son David in 1981, and wife Gladys in 2007, Harold is survived by his sons Alan and Gary (Nina); daughter Alda; grandchildren Hue (Shessy), Alena, Derick, Alex (Lucy), and Zena (Gord); as well as great-grandchildren, Gemma and Boden. He will be truly missed.

The family wishes to thank the staff and residents of Heritage Place for their love and kindness, and to nurse Rebecca, Dr. Butcher, and Dr. Reznick, for the compassion shown to Harold at his deathbed.

Harold was laid to rest with David and Gladys in Okotoks, Alberta.
Messages of remembrance may be left for the family at www.southcalgaryfuneralcentre.ca