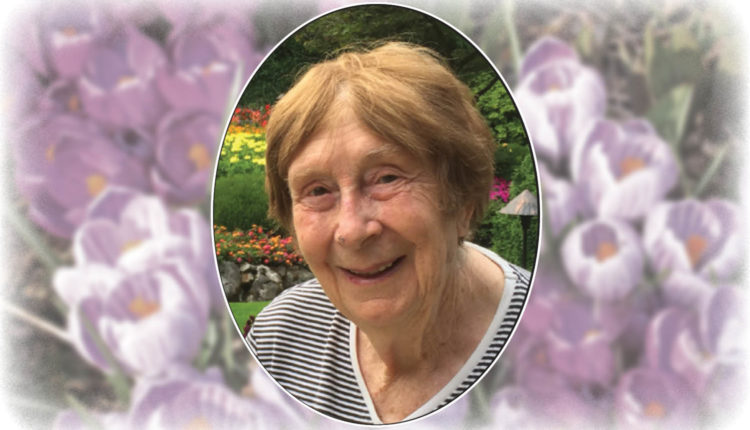 With her adoring husband and children by her side, Gwendoline (Gwen) passed away on October 30th, 2018, in Victoria, BC, at the age of 90 from Alzheimer’s disease. She is survived by her loving husband of 59 years, Jack, of Victoria, BC, son Paul (Cindee), daughter Alison (Igor), son Sean (Doreen), sister Daphne Ivamy (Fred, deceased) of Gosport, England, granddaughters Nadine, Natasha and Nicole (Sean and Doreen) and Katia and Julia (Alison and Igor), nieces Marion and Jennifer, nephews Colin, Jonathan and Tim, sister-in-law Linda D

Born in Gosport, Hampshire, England on December 3rd, 1927 Gwen is preceded in death by her parents, Edward A. Rose and Emma R. Rose, her sister Mabel (

Gwen was the youngest in her family and an evacuee during The Blitz and the Battle of Britain. She completed her schooling at the age of 15 and later moved to London where she became a legal secretary. In 1958, at the invitation of her dear friends Basil & Leonore (Pete) Peyton, who had previously emigrated from London to Vancouver, BC after the war, Gwen immigrated to Vancouver with the intention of staying a year or two. Her first job in iew (Essondale) Hospital. Later in 1958, she met her would-be husband, Jack Albhouse, the successful owner of Western Barber Supply. He said it was love aildren moved from West Vancouver to Salt Spring Island. In the early 70’s, along with her friend, Sanchia Seward, Gwen was one of the founding members of the Ganges Farmer’s Market, originally located beside the Ganges Marina parking lot, before it became too large and moved to the Centennial Park location, where it thrives to this day. Over the years, Gwen volunteered with Meals on Wheels, Girl Guides and Greenwoods Eldercare Society. She also worked part-time at the Gulf Islands Driftwood newspaper and, from 1981 to 1987, was the Executive Housekeeper at Hastings House. Jack and Gwen remained on Salt Spring Island for 45 years before moving to Victoria in 2015. Gwen lived a long, healthy and happy life. She loved theatre, literature, music, art, antiques, history, cooking, gardening and wildlife. All of these passions she passed on to her children. No wife or mother gave more love, more of herself, than Mum, and no wife or mother was ever loved more. While the pain of her loss is immeasurable, we will draw strength from some of the timely quotes she always seemed to have for the right occasion. So, we shall “Keep Smiling” and “Soldier On”, and take comfort in the endless happy memories she gave us. “We’ll meet again some sunny day.