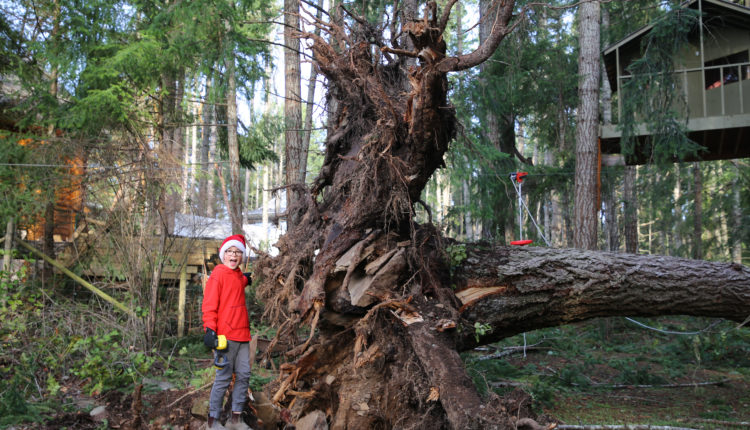 Salt Spring Island looked like it was caught between a battle of the Titans and came out the loser on Friday morning as islanders assessed the damage wrought by the previous day’s powerful windstorm.

Some areas had so many broken and smashed trees the damage could not have been worse if an actual battle of giants armed with hammers and maces had swept through.

BC Hydro reported the event was one of the most severe storms it had experienced in years, causing extensive damage to electrical infrastructure across Vancouver Island, the Lower Mainland and the Fraser Valley. As of Friday morning, 6,000 customers were still without power on Salt Spring.

“All available crews and resources will be working around the clock until all damage is repaired,” a BC Hydro update from Friday stated. “Due to the extent of the damage, many customers will be without power overnight and for some customers it could be days.”

The storm was the result of a powerful low-pressure system that started with southeast winds that gusted to 100 km per hour, developed over the course of the morning and ramped up in the early afternoon. About 330,000 customers around the coastal region lost power at the peak of the outages, which started just before 11:30 a.m. on Salt Spring and soon impacted most of the island.

“We started off with a few calls that started coming in around 11:30,” George said. “After that we soon realized it was going to be a chaotic day and the calls were starting to stack up, so we set up an area command post that allowed us to manage all the calls from one location. To manage that many calls is a very complex management.”

Response was coordinated between the Salt Spring Emergency Operations Program and Salt Spring Fire Rescue, with the emergency operations base set up at the Ganges fire hall. The two organizations were assisted by Salt Spring Ground Search and Rescue, also working closely with BC Ambulance and the RCMP.

“It was a good team effort because we started at noon and we didn’t close the centre until 10:30 that night,” said emergency program coordinator Elizabeth Zook.

The island’s response was put at risk because the CREST radio system based at the Central fire hall lost power. An electrician wired an emergency generator to the system, which had to be refuelled several times over Thursday night and Friday before power was restored.

“Because of the duration of the outage, we could have lost radio coms for the island,” George said. “It was a first for us.”

By mid-day drivers were being warned not to attempt North End Road because of multiple fallen trees, debris and downed power lines, and the two possible south-end arteries were blocked on Fulford-Ganges Road and Stewart Road. All major island roads were closed at some point during the day.

The ferry routes were cleared by Friday morning but many blockages still remained. The Fernwood bus route was rerouted and passage on North End Road remained closed between Fernwood and Epron roads.

Scrooge lives up to the legend