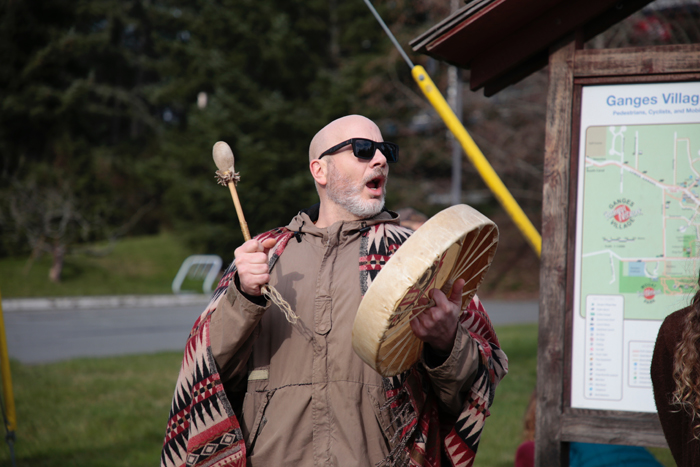 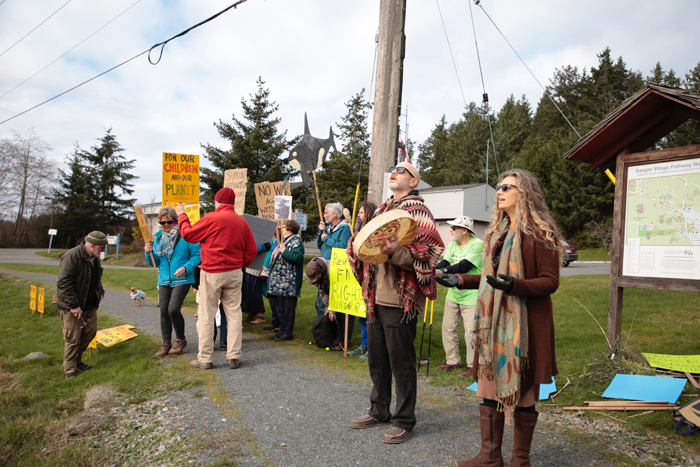 People lined up near the Ganges RCMP detachment. 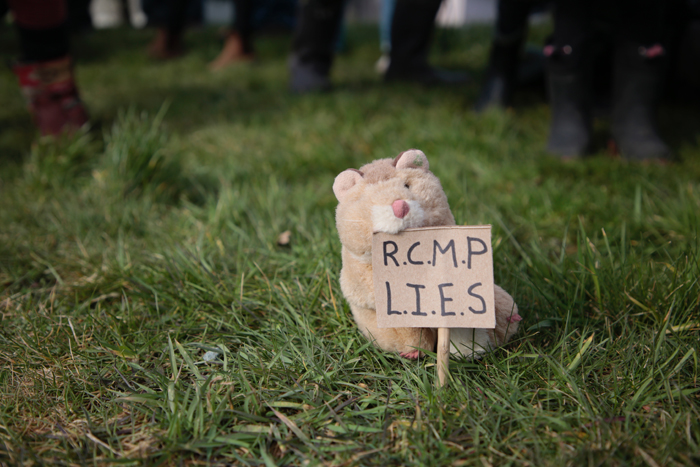 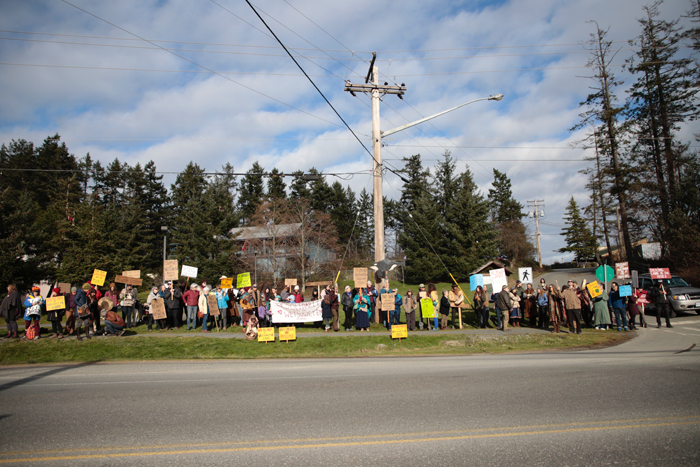 About 120 people attended the event to show support for the Wet’suwet’en hereditary chiefs of northern B.C. in their attempts to stop construction of a Coastal GasLink natural gas pipeline through their territory. 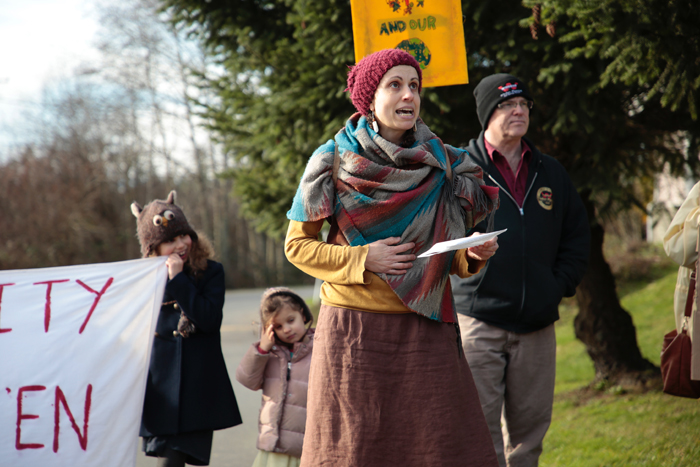 Tina Taylor, one of the organizers of the event, speaks during the demonstration. 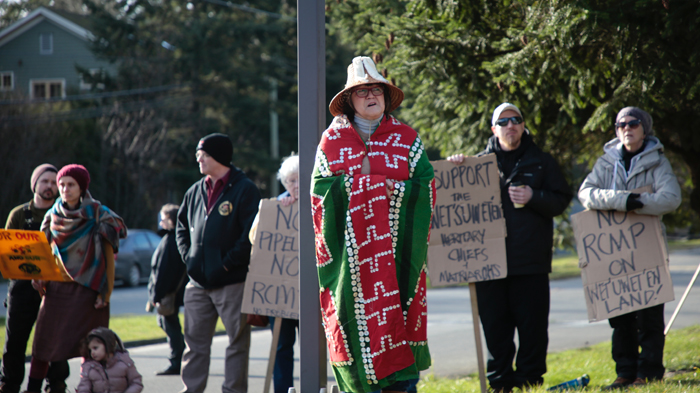 Christine Hunt speaks during the event. 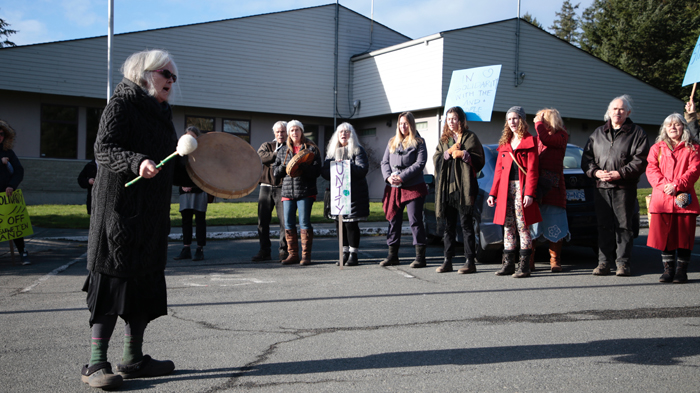 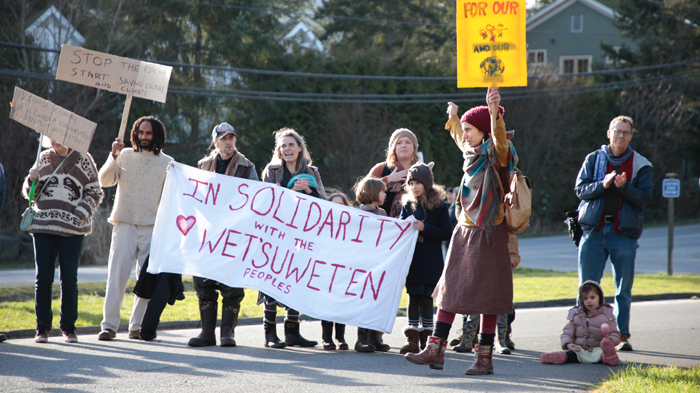 In solidarity.
Prev 1 of 8 Next

Salt Spring activists took to the streets in solidarity with the Wet’suwet’en people last Tuesday, when around 120 people demonstrated outside of the Ganges RCMP detachment against the RCMP’s use of force at the Unist’ot’en camp in northern B.C.

The demonstration coincided with protests around the country, including one at the B.C. legislature building as MLAs were arriving to hear the NDP government’s speech from the throne on Tuesday. Some individual islanders have been supporting the cause off-island, but this was the first event held on Salt Spring.

Organizer Tina Taylor told the crowd she is friends with a Wet’suwet’en family and seeing their struggle has caused her to want to act. Demonstrators held signs, chanted and spoke in a talking circle on part of the RCMP parking lot.

“They are an amazing family and I have been watching the mother, who is seven months pregnant, having to come out every day and fight for her beloved people and land,” she told the crowd. “I am here because I am disgusted that B.C. Premier John Horgan and Prime Minister Justin Trudeau will, with this pipeline, be destroying the sacred home and rightful land of this family.”

People of the Wet’suwet’en First Nation have been protesting the Coastal GasLink pipeline, which is slated to be constructed through their unceded land in the northern part of the province. The camp was set up in 2010 by the hereditary chiefs, whose positions are passed down through generations. In contrast, a number of elected band councils in the region have expressed support for the pipeline.

A checkpoint was established at the Unist’ot’en site to ensure visitors have consent to access the territory. A 2020 injunction was granted by the Supreme Court of B.C. to allow access to the area for construction crews. RCMP enforced that injunction on Feb. 10, arresting Wet’suwet’en matriarchs and chiefs, as well as other supporters.

Protests spread across the province, with demonstrators blocking the B.C. Parliament buildings on Tuesday and overshadowing the Throne Speech, which is the annual start of the legislative session. Highway 19 in the Comox Valley was also blockaded in support of the Wet’suwet’en people. On Friday, protestors took to the streets in Victoria to “shut down the B.C. government.” A national response also spread, forcing the CN and Via Rail companies to stop operations until blockades on railways were lifted.

MLA Adam Olsen was at the Throne Speech on Tuesday. He posted online that the event was “overwhelmed by the well-publicized protests that nearly shut down the British Columbia legislature,” adding that “Unfortunately, it appears the BC NDP are still invested in the 1950s ‘British Columbia Dream.’”

Olsen addressed the demonstrations during his time to speak during the legislative session. He told the Legislature, “It is important that people understand that what we see across Canada and on the steps of our Legislature was neither inevitable nor unavoidable. Every member in this chamber, with the exception of the B.C. Greens and our independent colleague, voted to ignite the tragic situation that we face. They voted for it over and over and over and over and over again — 14 times.” He continued, saying that reconciliation is not dead, “because when it dies, our dignity dies with it.”

Tuesday’s demonstration on Salt Spring lasted roughly an hour and was peaceful with no traffic disruptions. Other speakers included Myna Lee Johnstone, Christine Hunt and Brenda Guiled, among others.

A number of community members also expressed their opposition to the protest on the Driftwood’s Facebook page, following posting of a preliminary report and photos. A webpage commenter also noted: “The pipeline issues have been going on for three years. The democracy has made a decision. Proceed! You may not like it but to resist makes resistance undemocratic!”