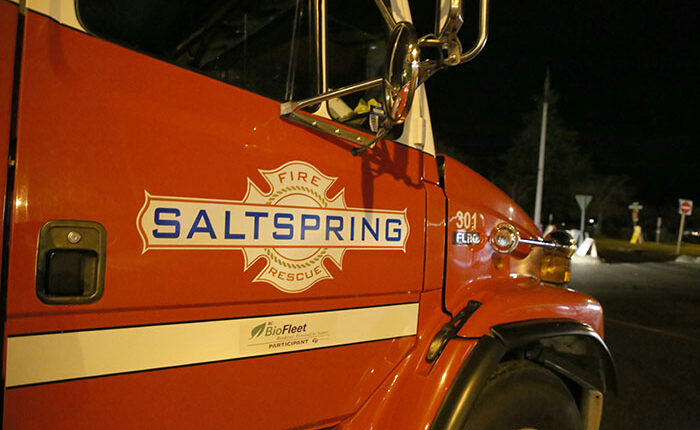 Salt Spring Island’s Fire Protection District (SSIFPD) board is down two members, positions which won’t be filled until a spring or summer referendum on a new fire hall is held.

The resignation of Andreas Gedeon and Elizabeth Zook comes less than two months after another board change-up that saw three new trustees acclaimed. Board chair Rollie Cook said the decision was made not to hold a by-election to fill the two seats, which would cost between $10,000 and $15,000, and instead combine the election with the upcoming referendum for a new fire hall.

The exact date of the referendum has yet to be set, but Cook noted it will take place in the spring or early summer. He added the smaller board won’t be a problem, even with the amount of work that is required ahead of the referendum.

“We’ve got a good team still, so we have our current trustees and we also have a great staff. Our fire chief and CAO are there for the board,” he said.

Chair Cook confirmed Andreas Gedeon, whose term was up in 2022, resigned due to work obligations. In a statement, Gedeon said it had been an honour to serve as a trustee.

“During my tenure of almost three years the board has been able to instate a 24-hour fire service, reach an agreement with the firefighters union, lay the groundwork for a referendum on a new fire hall and install a highly competent fire chief,” he stated in an email to the Driftwood.

Zook, who was acclaimed to the position in November of last year, said she resigned due to a conflict between the demands of evening meetings and family responsibilities.

“I am still participating helping on some committees,” she said.

The resignations come during a time when a mandatory vaccination policy implemented by the board is being debated. The policy would require all firefighters to be fully vaccinated by Feb. 28 or be placed on leave without pay. The board has received 42 letters of opposition as well as a petition with 101 signatures calling on the board to keep vaccination voluntary. The board also heard from 13 speakers at a town hall portion of a Jan. 17 meeting, all in opposition to the policy.

Gedeon noted that his resignation was not related this policy and stated his support for provincial and federal health policies. Chair Cook also confirmed that neither Gedeon’s nor Zook’s resignations had anything to do with the policy.

In response to the fire board’s vaccination policy, community members opposed to it have said they will gather in Centennial Park at noon on Monday and then decorate the streets around the Ganges fire hall “with valentines for ALL firefighters/first responders,” stated Robyn Oakes on the Salt Spring Community Discussion Forum’s Facebook page. “This is the same day the trustees will hold their final meeting, before their mandate takes effect. It’s now or never, to send a message to them, we value all firefighters/first responders willing to serve our community.”

The fire hall referendum will also be a topic at the SSIFPD board’s Monday, Feb. 14 meeting. The board will be receiving a report from Return on Insights, the company tasked to gather community input on the fire hall project. An agenda for the meeting has not yet been published, yet Cook confirmed it will be held virtually given the current state of the COVID-19 pandemic.