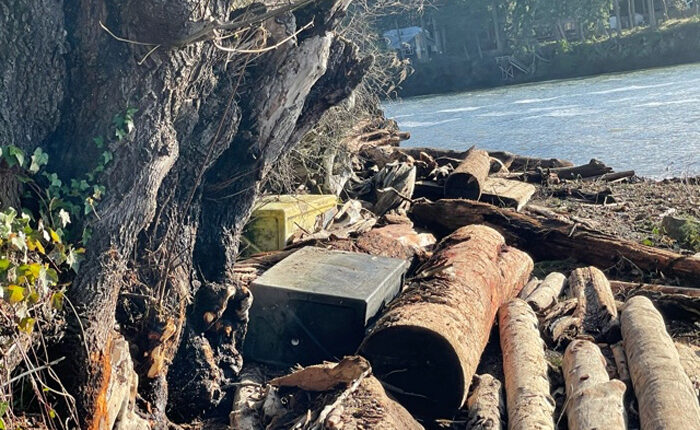 A Salt Spring resident is calling attention to a faulty management regime when it comes to oversight of shellfish harvesting tenures after watching one such operation seemingly fall apart before his eyes over a period of two years.

Jeremy Sicherman lives near Baker Beach, where pieces of wood, metal and plastic belonging to the Evening Cove Oysters farm have been appearing after periods of strong winds and waves. He’s made multiple complaints to the federal fisheries department about the situation. Sicherman said Evening Cove’s former owner and current operator Andrew Dryden has been consistently friendly and helpful every time there is an incident, sending staff to clean up whatever has broken off and washed up to shore. The problem is that pieces have continued to come apart and repairs appear temporary at best, so Sicherman continues to send file complaints along with photo evidence every time another event occurs.

“I don’t know what else to do,” Sicherman said. “I feel like if I stop, I’ll feel like a schmuck when somebody steps on a nail — especially if it’s my kid or my dog.”

His most recent find was a series of large plastic trays. The aquaculture farm has not been producing stock during the lengthy federal process around ownership transition, so those trays have been floating off when they detach instead of sinking.

Dryden told the Driftwood he has also been frustrated by the breakages. He’s frequently given up weekends with his kids to drive to Salt Spring from Nanaimo to take a tray or other item off the beach.

“I just have to grin and to be as responsive as I can, and to try to be a good steward of the environment there,” Dryden said.

He added he believes the aquaculture rafts and materials are now secure and will be until the new owner comes on in the fall.

“It’s been unfortunate and I’ve tried to do my absolute best with the upland owners,” Dryden said.

Sicherman believes the materials Evening Cove used to make repairs and secure items are too flimsy, but an equally concerning issue is the seeming inability of the Department of Fisheries and Oceans (DFO) to govern its jurisdiction.

DFO told the Driftwood the federal government “recognizes that marine debris, particularly plastic debris, is a serious environmental concern and that it is important that we remove debris from marine environments.”

“DFO works with the shellfish aquaculture industry and individual facility operators to ensure gear and infrastructure are securely anchored or attached. Despite this, sometimes materials become loose, particularly during stormy weather,” the department stated.

It added it conducts ongoing site inspections of shellfish aquaculture facilities. When equipment deficiencies are found DFO directs cleanup or repair by the facility operator.

In regard to Evening Cove, DFO said it is aware of the issues with the tenure.

Fishery officers from the Conservation and Protection Aquaculture Unit initiated a site investigation in Booth Bay in May 2021 in response to a complaint, and requested records from the company.

“Following this site visit, and discussions between DFO’s Aquaculture Program and the operators of the facility, significant improvements have been made to comply with the conditions of licence.”

A subsequent site visit by fishery officers noted improvements to secure the aquaculture equipment had resulted in no new reports of debris from the site. The complaint file was closed in early June.

DFO asks the public to forward information on issues of this nature or any contravention of the Fisheries Act and regulations. Anyone with information can call the violation reporting line at 1-800-465-4336, or email the details to DFO.ORR-ONS.MPO@dfo-mpo.gc.ca.