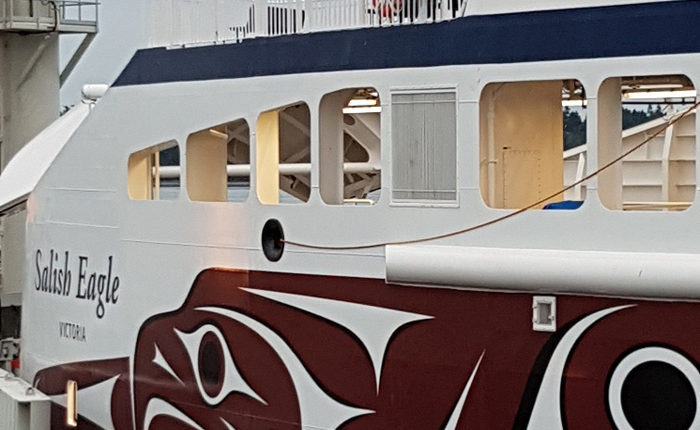 The second of BC Ferries’ three new vessels, Salish Eagle, will officially commence service on Wednesday, June 21, at 9:10 a.m. on the Tsawwassen-Southern Gulf Islands route.

The non-stop sailing will see the ship arrive in Long Harbour on Salt Spring Island at 10:33 a.m.

“After the successful introduction of Salish Orca in mid-May, we are very excited to introduce our second new ship, Salish Eagle, into service for our Southern Gulf Islands customers,” said BC Ferries’ president and CEO Mark Collins in a press release. “This vessel will provide our customers safe and reliable service for years to come, and we look forward to its additional environmental and cost-saving benefits as well.”

According to BC Ferries, Salish Eagle and her sister ships — Salish Orca and Salish Raven — were named to honour the Coast Salish people as the original mariners of the Salish Sea. Each vessel features the artwork of a different First Nations artist.

The vessel, which accommodates approximately 145 vehicles and up to 600 passengers and crew, is equipped with two marine evacuation systems with life rafts, smoke and natural gas detection alarms, and state-of-the-art fire suppression systems. The vessel measures 107 metres in length overall and has a service speed of 15.5 knots. Passenger amenities on board Salish Eagle include: a Coastal Café; Passages Gift Shop; comfortable lounge seating with panoramic views; children’s play area; spacious outdoor seating on an open sundeck; pet area and elevators.

The summer schedule also comes into effect on June 21, with many more sailings available on the Southern Gulf Islands Route 9.