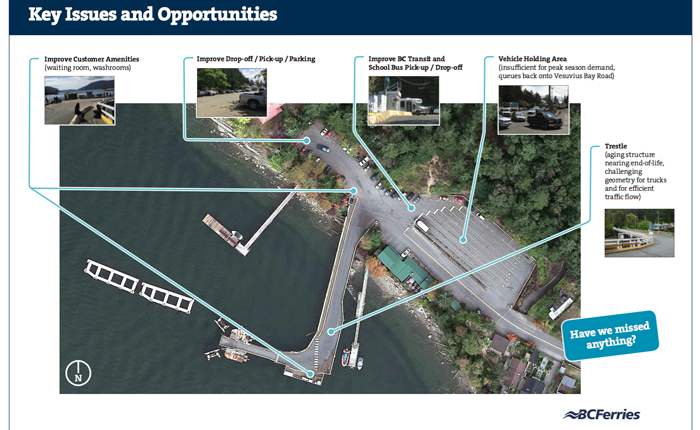 Members of the public have their chance to help shape the development of the Vesuvius ferry terminal, with consultation materials and draft concepts now available on the BC Ferries website.

The corporation’s terminal development team has been working with the Salt Spring Ferry Advisory Committee and stakeholders to identify key issues and opportunities at both the Vesuvius and Crofton terminals since the spring of 2019.

BC Ferries presented two draft ideas for Vesuvius to the FAC and to a closed stakeholders’ session earlier this month. According to the public engagement materials, the final plan will likely involve a combination of elements from both options, rather than endorsing one or the other as drafted.

As presented, both options would increase parking on the terminal site and extend the holding space for vehicles waiting to board onto the trestle, similar to what is done now in Crofton.

In both concepts the trestle would be rebuilt to decrease the grade, and would be curved to eliminate the current right-angle turn that is difficult for commercial trucks to manage.

Option one would accommodate 70 standard vehicles combined in the holding area and trestle, and provide 38 additional parking stalls. Option two would take out some of the steep bank at the edge of the holding area, increasing the space to permit 79 vehicles waiting to load and 52 parking spaces. This option also has traffic leaving the ferry from the left side of the trestle, switching the usual lane direction that Canadian drivers are used to operating under to allow more parking on the trestle itself.

Both options include room for two bus stops, as well as a waiting room with washrooms. Option one puts the waiting room on the hill side of the compound between the current parking and holding areas, while option two puts it on the water side adjacent to the top of the trestle.

The two draft concepts and a short survey can be found at bcferries.com under Public Engagement — Terminal Development Planning.

Opportunity for public feedback on terminal concepts for Crofton was closed on Nov. 15. A Phase 2 Engagement Summary is expected to be posted to the website in December, with a terminal development plan to be completed in 2020.

For more on this story, see the Nov. 27, 2019 issue of the Gulf Islands Driftwood newspaper, or subscribe online.