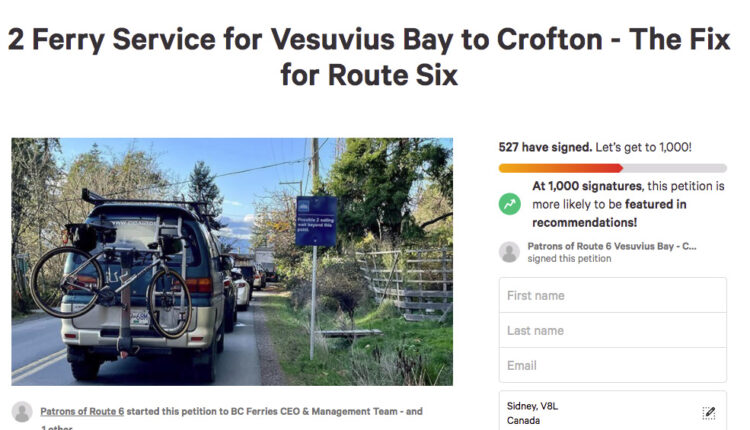 A Salt Spring man who wants to see gridlock reduced on the Vesuvius-Crofton ferry route has created a Change.org petition to press BC Ferries for action.

David Courtney has proposed that when the MV Quinsam vessel is brought on to the route in the spring of 2022 that the MV Quinitsa also be kept in service to increase the number of sailings and capacity.

As of Thursday morning the petition titled “2 Ferry Service for Vesuvius Bay to Crofton – The Fix for Route Six” had received 527 signatures.

Courtney maintains that having two ships on Route 6 will reduce traffic congestion at both Vesuvius and Fulford Harbour terminals on Salt Spring, and at Crofton on Vancouver Island, whose community is also impacted by long lineups of travellers on Chaplin Street.

Traffic on Route 6 has been up significantly in 2021 when compared to 2019 (pre-pandemic) months, resulting in frequent sailing waits in Vesuvius Bay and Crofton.

Courtney’s proposal is detailed in this opinion piece published in the Dec. 8, 2021 Driftwood.