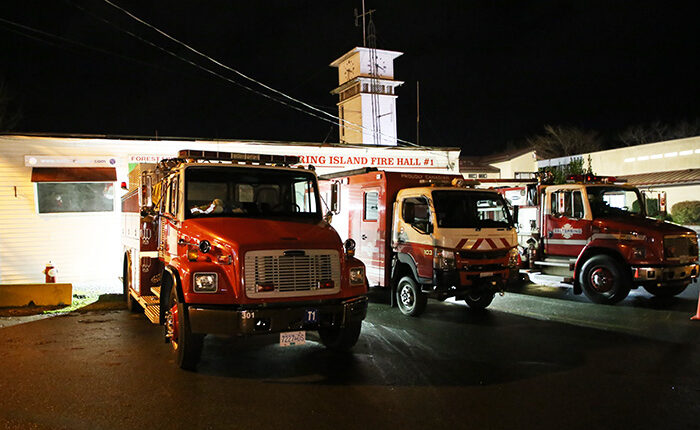 Community members are voicing their opposition to a policy that makes a COVID-19 vaccine mandatory for all of Salt Spring’s firefighters by Feb. 28.

The mandatory COVID-19 vaccination policy was approved by trustees on Dec. 13, and made public at a Jan. 17 Salt Spring Island Fire Protection District board meeting. While leaders at Salt Spring Island Fire Rescue say the policy is necessary for public safety and the safety of their employees, many community members opposed the policy in speeches at the Jan. 17 meeting, as well as letters and a petition submitted to the fire board.

Cameron Proudfoot, a paid-on-call firefighter who has been with the department for seven years, said while the policy doesn’t affect him currently it is affecting colleagues.

“What I’m seeing in our community, it’s like the fire department is a microcosm of this,” he said. “The mandates are forcing people to have to choose between their work, their livelihood, their families. It’s causing an incredible amount of stress in these families.”

He asked for the policy implementation to be pushed forward, and for the board to look at other options such as rapid testing, masking and changing of assigned duties.

“I’m not here to deny vaccines, mandates, the existence of COVID or anything like that, I just wanted you guys to be able to have a face of one of the firefighters who’s going to be mandated out of their jobs,” Red Oakes, a paid-on-call firefighter who has been with the department for seven years, told the fire board.

Oakes said there were plenty of firefighters who would be let go because of the policy, and that there would be a “decreased response of our firefighters due to this mandate.”

The policy requires all “high risk” employees, which includes all firefighters, to provide proof of full vaccination, or proof that they are unable to be vaccinated, by Feb. 28. Those who fail to do so will be placed on unpaid leave for up to six months. At the six-month mark, if they are not fully vaccinated, “the district may terminate their employment.”

Employees can request an accommodation under the policy for medical, religious or other prohibited grounds of discrimination under the BC Human Rights Code. Andrew Peat, Salt Spring Island Fire Rescue’s chief administrative officer, said accommodation requests are a human resources matter, so he could not comment on whether anyone had asked for accommodation.

How the mandate will affect operations is not clear.

“There was a percentage of firefighters that approached me,” said Fire Chief Jamie Holmes. “That could change our operations,” he said, but did not elaborate further in the public portion of the Jan. 17 meeting.

Captain Ken Akerman is president of the International Association of Fire Fighters (IAFF) union local for Salt Spring, which represents the nine career firefighters at the department.

“I don’t believe it’s going to be an issue with the career members. They’ll be able to respond,” Akerman said when asked how the policy might impact operations. He noted he could not speak for the over 30 paid-on-call firefighters not represented by the IAFF.

Our union continues to encourage and strongly recommend that all members be vaccinated to prevent the spread of COVID-19,” Akerman said.

“It’s extraordinary, we are infringing on member’s personal beliefs and right to choose and so it’s all very carefully written,” Peat said of the policy, adding that the fire department asked for input from members on a draft version of the policy and it has also been looked at by legal counsel.

Peat added that he can’t speak for the motivation of the trustees who implemented the policy.

A request to speak with board chair Rollie Cook was not answered as of publication time, however, the policy’s preamble details how a potential COVID-19 outbreak at the fire department would severely compromise the ability to respond to calls.

“Fire Rescue is a small organization, and its effectiveness relies on the ability of its trained and dedicated employees being able to respond,” the policy states.

The policy also noted that the nature of firefighting entails members having in-person contact with the public, with each other and with other first responders and the RCMP.

“Our members come in contact, routinely, with vulnerable people in our population, be they elderly, be they economically disadvantaged and we’re putting them at risk . . . if we haven’t taken every precaution to protect them and ourselves,” Peat explained.

The policy states that it aligns with recent vaccine mandate announcements for all BC public sector employees and federal employees such as RCMP members.

Fire departments across B.C. have been grappling with implementing similar policies to Salt Spring’s. A labour arbitrator is deciding on the case of nine Richmond firefighters on leave without pay after the city implemented a mandatory vaccination policy there. In an agreement with their firefighters union, the City of Vancouver has temporarily allowed staff to continue working on the condition that they take a COVID test and share the results before each work day. And some fire departments are being heavily affected by the COVID-19 virus. The Surrey Fire Service used rapid testing to keep staff levels up, amidst 25 per cent of their workforce contracting the virus over the past month.

The board received several letters and a petition in opposition to the policy. Thirteen people spoke at the Jan. 17 meeting, including a local constable and member of Mounties for Freedom James Elliott.

Noting that his opinions don’t reflect those of the federal government or of the local detachment, Elliott said he and the group “stand united against the forced coercive medical intervention of Canadians [and] against the discrimination faced by those who have exercised their right to decide on their bodily autonomy.”

Several speakers and letter writers brought up potential negative side effects of vaccination, while others emphasized the high numbers of people in Canada who are already vaccinated, at 83 per cent as of Jan. 23, and noted that the vaccines do not necessarily prevent people from getting and passing on the COVID-19 virus.

The board has to review the policy every six months, Peat emphasized, and any mandates from the provincial or federal government would trump it.

Changing the policy would require a two-thirds majority of the board, Cook said, adding that the board will look at the matter again at their Feb. 14 meeting.

Editor’s note: All letters of opposition to the vaccination policy were not included in a print version of this story published in our paper on Jan. 26.

Letter: Small dwellings not the villain