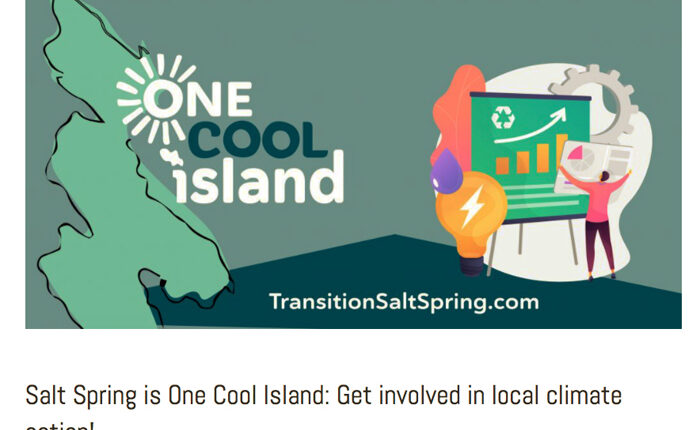 While the coronavirus pandemic has preoccupied Salt Spring Island and the world in the past year, a core group of 23 volunteers has continued working on how to manage another crisis: climate change.

TSS estimates that if those actions are taken they could reduce Salt Spring’s greenhouse gas emissions by 50 per cent by 2030, and mitigate the increased risk of forest fires, drought, sea-level rise and biodiversity loss, among other climate-change impacts.

The CAP 2.0 document will be officially launched at a public Zoom event on Tuesday, March 2 at 6:30 p.m. (with registration at www.tinyurl.com/CAPLiveZoom). Saanich-Gulf Islands MP Elizabeth May and Capital Regional District director Gary Holman are scheduled to participate, along with TSS chair Bryan Young.

“It’s good to see climate action planning on Salt Spring finally gaining traction,” said Elizabeth White, a CAP 2.0 steering committee member who oversaw editing of the final document with Young. “We have an actionable set of recommendations for the organizations, governments and businesses that serve our island. And, most importantly, much more alignment between governments, agencies and the general public on the need to act.”

The plan covers a vast swath of island life: transportation, food and agriculture, forest and freshwater ecosystems, built infrastructure, and land use and settlement patterns.

For each suggested action the plan identifies public agencies that should have a role in enacting them, and also outlines what individuals, non-profit groups and businesses can do to make a difference, when applicable. A review of the Salt Spring Island Official Community Plan and Land Use Bylaw, which are Islands Trust documents, is also recommended.

In light of recent push-back against Islands Trust efforts to explore protection of the Coastal Douglas-fir ecosystem, one CAP 2.0 area that could be controversial is support for granting greater regulatory and enforcement powers over clear-cutting and tree-clearing on private land to the Islands Trust (as lead agency) and the CRD. However, the plan also suggests creating financial incentives for landowners to protect forest lands, and to promote “sustainable forestry practices and tree-thinning through incentives or other program initiatives.”

“We don’t need to have a zero-sum game here on Salt Spring with respect to our forests,” states the plan. “With the right tools we can balance private property entitlements with the requirements to lower emissions and adapt to a hotter, drier and more dangerous future. In order to get there, landowners need to be properly rewarded for enhancing forest ecosystems rather than cutting them down.”

Assuming sufficient financial and community support is available, Transition Salt Spring envisions serving a role as “keeper of the plan and as community convenor to facilitate collaboration leading to project development.”

TSS chair Young was a lead editor of the document.

“What’s striking,” he said, “is that as Transition Salt Spring has retooled to take on the implementation of this plan, a number of doors are opening. This just seems to be the right moment for this plan. I think it’s because people now really understand that while climate action means big changes, it offers lots of opportunities for good change — for livelihoods, for the land and for our future on this island.”

The plan creators drew on the input of dozens of experts and input from more than 2,000 islanders. It builds on the previous climate action plan for Salt Spring, which was published in 2011.

To read the whole plan, the 10-page executive summary and supporting material, follow the links on the transitionsaltspring.com website.