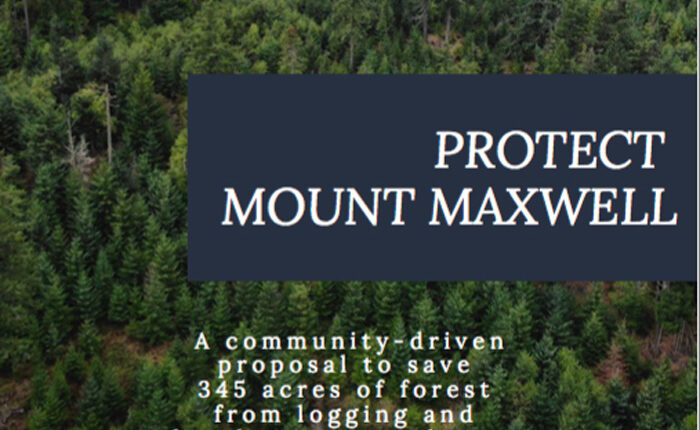 A campaign to purchase and protect a large forested area on Mount Maxwell arrived before the Salt Spring Parks and Recreation Commission last Tuesday, where local advocates pitched a partnership that could protect more than 100 hectares from development.

A broad community coalition with groups promoting recreation, conservation and education are supporting the proposal, which would both protect the land and establish sanctioned trails for mountain biking and equestrian use, as well as hiking. Spokesperson Elizabeth FitzZaland gave the majority of the presentation about the proposal, to which $1 million has already been offered by a single donor, and another $200,000 in smaller donations has been pledged. FitzZaland reported there is momentum toward the campaign, but a body to take ownership of the property needs to be identified to move forward.

“This property came on the market a while ago and came to our attention at Salt Spring Solutions as a really significant piece of land in that it’s 345 acres of forest here in the Gulf Islands, right next to all this other protected land,” FitzZaland said. “And seeing large tracts of land like this go on the market is really unusual.”

FitzZaland explained the property, comprising four lots, has been owned for over 20 years by people who moved to protect it when the Texada logging dispute was taking place. Community organizations succeeded in protecting adjacent lands in the area, some of which now belongs to North Salt Spring Waterworks District and Mount Maxwell and Burgoyne Bay provincial parks.

The property in question was logged in the past and is now regenerating. FitzZaland noted forest cover has been identified as an important carbon sink, so maintaining it would help the island’s climate action goals.

Mount Maxwell, or Hwumet’utsum in the Hul’qumi’num language, is also important to First Nations. Stqeeye’ Learning Society representative Joe Akerman spoke about the work he and his extended Cowichan family members have been doing at Burgoyne Bay and how more education could take place if the area becomes a park. Co-management between the Capital Regional District and Indigenous groups is one idea that has been raised.

“As much as we would love to acquire land ourselves, we don’t know that we’re ready to take on that level of responsibility and insurance and those types of things, but we certainly are well positioned to help provide some management and leadership, and to share decision-making with local nations,” Akerman said. “I think it’s a great opportunity for us to do things differently. Reconciliation was mentioned, and local governments have the responsibility and will hopefully take greater steps forward to work with First Nations.”

Other organizations that support the plan to protect the area and designate multi-use trails include North Salt Spring Waterworks, Island Health, School District 64’s Indigenous Education Program and Transition Salt Spring, along with many recreational groups.

The property was originally put on the market at $2.3 million. Local electoral area director Gary Holman asked for clarity on the property’s current status as a purchase offer was known to have been on the table. FitzZaland explained that conditions have been approved and a couple from Vancouver will take possession in January. However, the community group has been in contact with them and learned they had not wanted to purchase all four lots and don’t really need 345 acres.

“They said if the CRD or PARC is interested in a public purchase of some of those [lots], they would be interested in hearing the proposal and talking about it. So they indicated to us to keep moving forward and to come back to them,” FitzZaland said.

PARC did not have discussion of the proposal scheduled on Tuesday’s meeting agenda. Members did refer to it later in the meeting, though, in relation to a different land acquisition pitch made by Charles Kahn in September for 49 acres near Peter Arnell Park. While both areas were found to be of interest, commissioners noted the Maxwell proposal has donors and multiple community groups already on board. They voted not to pursue ownership of the land proposed by Kahn, but encouraged parkland dedication if the land is subdivided.

The commission currently has around $834,000 in its parkland acquisition reserve, and has scheduled most of that toward purchasing land for sports playing fields in 2021. Holman suggested there are some parcels PARC owns on the island that aren’t very suitable for parkland and some of them might be sold off for affordable housing purposes. The sale dollars could then be used to purchase more suitable land.

Such decisions must go to ratepayers for approval.