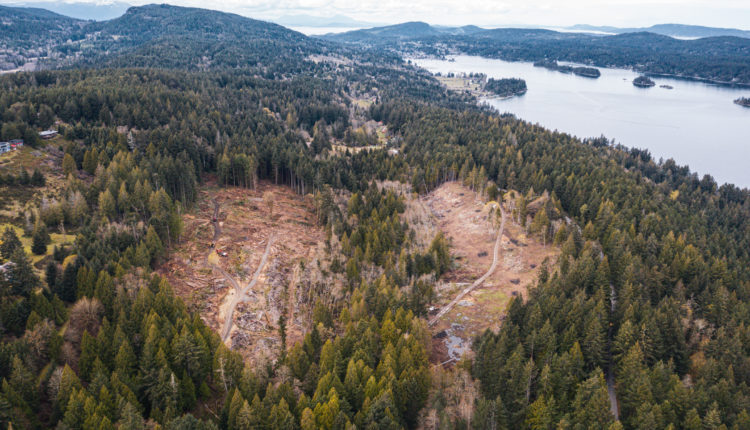 Limited restrictions on the clearing of private land on Salt Spring continues to be a major concern for islanders who have seen clearcuts transform their forested neighbourhoods into stripped-down wastelands.

While most people are focused on the global pandemic right now, some are calling attention to the fact that controversial forestry practices are still continuing, and in some cases appear to be ramping up.

Peter McAllister, a long-time environmental activist who happens to live on the other side of the ridge from a 40-acre Beddis property that’s been logged for the past 18 months, has been one of the loudest voices campaigning for a change to local regulations. McAllister says the situation has become even harder to take as work advances closer to property lines.

“We have literally been going crazy up here for weeks and weeks, ever since the COVID stay-at-home order,” McAllister said. “It’s been horrible with the noise of industrial chainsaws. We can’t hang around in town and we can’t go to parks. It’s driving the neighbourhood crazy and I fear for our mental health.”

McAllister wrote to locally elected officials, MLA Adam Olsen, Health Minister Adrian Dix and provincial health officer Dr. Bonnie Henry asking that logging be suspended, at least while people are being asked to stay at home. His official response from the province is that forestry is considered an essential service.

Property owner Gary Stunder was unable to respond to the Driftwood’s request for a comment before presstime.

Alex Harris, a young documentary filmmaker and photographer living on the island, is also horrified by local clearcuts. She has a unique vantage on the impact through the aerial footage she’s taken using an ultra-light drone. The sites she’s photographed including the Beddis property are visible from the road, but the overhead view provides the full scope of those clearings.

“I wouldn’t call myself an environmentalist or a tree-hugger,” she added. “This is really about ecological collapse and saving the planet.”

Recent clearcutting at an 11-acre property off Churchill Road is just the latest example of her concerns. Along with the impact of losing more of the island’s biggest trees, she cites loss of island biodiversity, the damage to local watersheds and the heightened risk of wildfire as some of the potential issues related to clearcutting anywhere on the island. But for now there are few barriers to removing forest cover.

Islands Trust bylaw enforcement office Warren Dingman confirmed the Churchill Road property owned by Jean Barakett is not within any development permit areas. There are no regulations that would restrict tree-cutting there.

Barakett did not respond to a request for comment on why the land has been cleared, and her husband Brian Milne declined to comment at this time.

The Salt Spring Local Trust Committee added Coastal Douglas-fir protection to its projects list in December 2019 following sustained requests for action from concerned residents over the previous year. The project’s focus will be on creating a new development permit area.

Input sought on Ciderworks’ plans for lounge and outdoor patio