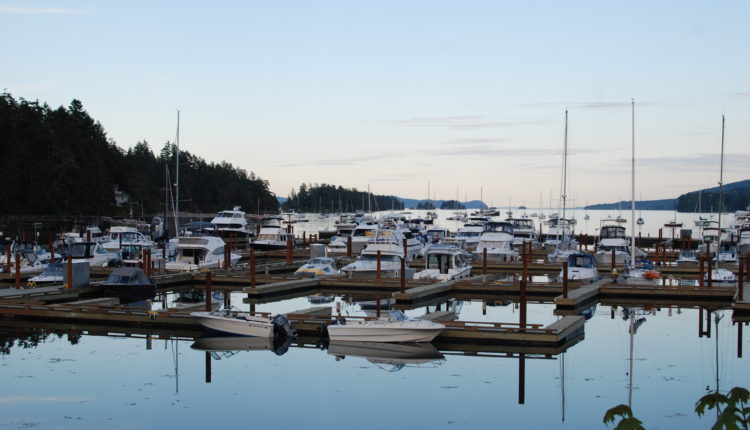 Visitors have started returning to Salt Spring with the restrictions on nonessential travel within British Columbia lifted, but many islanders continue to be concerned about who is coming and what they may be bringing with them.

Fears that Americans may be exploiting the “Alaska loophole” or otherwise skirting border rules continue to loom as pleasure boats flying the United States flag were seen in Ganges Harbour this past weekend.

Glad’s Ice Cream Shoppe owner Frank Normile said tourism has definitely increased over the past couple of weeks, and while he glimpsed more U.S. licence plates during the previous weekend, he’s still concerned about people coming in from areas of infection.

“We have such an elderly population, including myself, on the island — and if we get an outbreak here it’s going to decimate our population because [so many people here] are over 65,” Normile said.

The Canada-U.S. border remains closed to non-essential travel by mutual agreement until July 21. Canadian law provides for fines of up to $750,000 for those who enter on false pretenses, and those who lie about their destination can also be banned from entering the country for five years. RCMP say no fines have been issued so far in B.C.

Normile is frustrated by the perceived lack of action. He has called the offices of MP Elizabeth May, B.C. Premier John Horgan, provincial health officer Dr. Bonnie Henry and the Canada Border Services Agency without getting through, and was told local RCMP are not enforcing boaters.

“This is a provincial health issue. There’s no jurisdiction because no one wants to step up to the plate, no authority and no enforcement,” Normile said.

Horgan said Thursday he has spoken with Deputy Prime Minister Chrystia Freeland about the issue and requested she work with American officials to stop unlawful tourism.

“Outbreaks in Washington state, California, Arizona, Texas are absolutely unacceptable. We have to maintain our border security so we can protect the progress we’ve made here in British Columbia,” Horgan said during a press conference.

Cpl. Matthew Crist of the Salt Spring RCMP detachment confirmed local police can investigate complaints that Americans are not following CBSA orders, whether those people are travelling by car or by boat. The RCMP is also able to enforce B.C.’s 14-day quarantine requirement and investigate anyone who is reported not to be following it. Crist said the island detachment has not received any reports of either scenario in the past week or so, however.

Regarding the Alaska loophole, he noted Americans going to Alaska must declare their plans to CBSA. They are required to take the most direct route and are allowed to stop for food, fuel and rest only.

“They should only do what’s necessary and then go away,” Crist said. “They shouldn’t go for a hike on Mount Maxwell while they’re here, and they shouldn’t even shop for non- essentials.”

Crist said there was no conceivable reason a vehicle on the way to Alaska would be on Salt Spring, but there are legitimate reasons someone could have an American licence plate. The vehicle owners could be dual citizens with a car registered in the U.S., or they could be Americans who have entered Canada lawfully and underwent the 14-day quarantine.

Salt Spring’s Phoenix Lazare and her partner Justin Kelley drove into Canada from Nashville in January and have been on the island for the duration of the pandemic. They are worried about going into Ganges with the car since it sports Tennessee plates and will continue to do so until Kelley’s immigration status changes.

“We’re thinking we should put some Salt Spring bumper stickers on. Anything to get the message across,” Kelley said.

Crist recommends that anyone who has concerns not jump to conclusions, but report them to RCMP to investigate. The local detachment can be reached at 250-537-5555.

COVID concerns may have contributed to a shoving incident between customers at Country Grocer over the weekend. Crist said police attended and helped de-escalate the situation, but no charges were necessary and no Americans were involved, contrary to a rumour circulating about the incident.