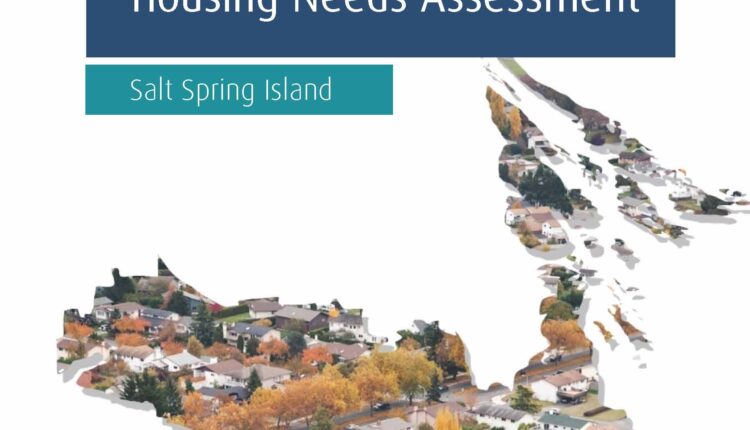 A new assessment of housing needs on Salt Spring has confirmed that rental options have decreased on the island even as the need for them has gone up, and single people are facing the biggest challenge in finding affordable homes.

Using Canadian census data from 2006 and 2016 as well as more recent information, the report concludes households would need to have an annual income of approximately $66,000 to afford the average $1,585 rent on Salt Spring. The median income of island renters in 2016 was just $33,000.

Households relying on a single income not surprisingly struggle the most, but the severity of that struggle is eye-opening. Male lone-parent households on Salt Spring reported incomes 42 per cent lower than the regional average.

The report found that 75 per cent of households are currently homeowners and 25 per cent are renters. Looking at the 10-year trend recorded in the census data, and the lack of housing that is purpose-built for rental, the consultants conclude the ratio will skew to an even smaller percentage of renters in the future.

“If Salt Spring Island continues growing in a similar manner as the past, the community will see an additional 601 households from between 2016 and 2025. New households are projected to be 11 per cent renters and 89 per cent owners,” the report states.

Need is also increasing, however, including among the most vulnerable sector. The 2018 point-in-time homeless count identified 131 people who were experiencing homelessness. This represents a 58 per cent increase from 2016, when 83 people were counted. BC Housing’s waitlist for households seeking non-market housing (affordable housing based on income) on Salt Spring for 2020 included 46 seniors, 10 families and eight people with disabilities. The consultants note the numbers likely underreport actual demand.

Speaking to the Salt Spring Local Trust Committee about the housing report on Dec. 15, Islands Trust regional planning manager Stefan Cermak observed, “The projections that are shown are only that — they are projections. And they are based on assumptions that things will stay the way they are.”

Cermak added the LTC has some power to change those projections through their actions.

A project to approve temporary use permits for residential purposes has been on the LTC’s books for some time as a means of opening access to housing quickly, but is looking increasingly unlikely to produce results. The proposal would allow temporary use of units that are not currently considered legal dwellings, such as cottages and secondary suites located outside the permitted zones.

Planner Jason Youmans reported the project has become complicated to the point that it will be difficult to meet the original goals. One example is finding a way to permit tiny homes on wheels. The Capital Regional District’s building inspection department does not support issuing permits for structures that don’t meet the BC Building Code or that may not meet other health and safety guidelines.

“The LTC will have to determine what constitutes a greater concern — that land use approval is secured for unconventional types of housing — or that all types of housing approved by the LTC meet established health and safety standards. For the moment, these options appear mutually exclusive,” Youmans’ staff report states.

The LTC voted last Tuesday to defer action on the TUP project and incorporate it into its Housing Challenges and Solutions project, which will potentially develop a broader range of bylaw changes supporting housing.

“I don’t think this is causing much delay because while the COVID pandemic is going on, we’re unlikely to evict anyone living in a seasonal cottage,” commented trustee Laura Patrick.

The LTC adopted a resolution in October 2020 to forego enforcement activities against unlawful dwellings during the public health emergency.