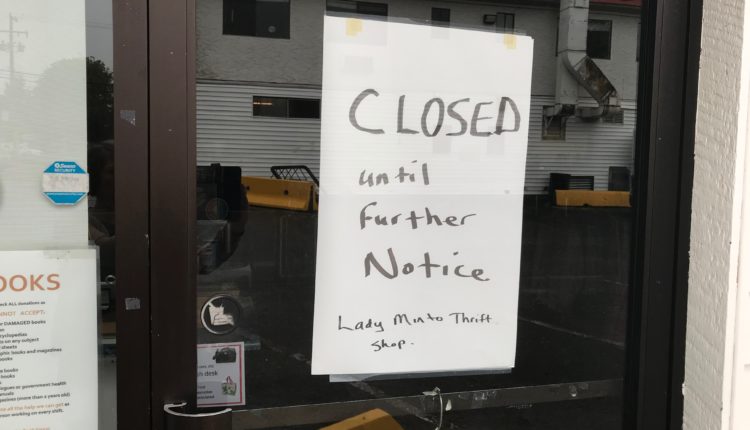 Economic development advocates are warning the Gulf Islands’ quirky culture of independent cafes, shops and artisans could be in trouble if small-scale local businesses can’t make it through the current crisis.

While new federal and provincial supports aimed at small businesses have been announced this week, including a new rent subsidy promised for commercial tenants, it may not be enough to meet local needs.

“A lot of businesses aren’t going to be here. We really have an economic disaster that our islands are facing,” said Francine Carlin, Salt Spring Community Economic Development Commission chair.

Salt Spring Sea Salts founder Philippe Marill is one of those who is worried. Although he has built up brand recognition, his regular sales venues have mainly disappeared while his expenses continue.

“I’m trying to figure out how to keep going through this crisis because we depend a lot on tourism, gift markets and craft shows,” Marill said. “I’m lucky compared to a lot of people because I have some stock for online sales, but at the same time I feel Salt Spring Sea Salt is in jeopardy if we don’t find a solution.”

Carlin said any business that relies on tourism will be hard hit, from accommodations providers to artists. Some relief may come through the Canada Emergency Response Benefit but that might not be enough to sustain recovery over the long term. Other programs, like the Canada Emergency Business Account loan, may be aimed at a different type of business.

“At the grass roots level, a lot of these programs aren’t really accessible to the micro businesses we have here on Salt Spring. Many are already carrying a lot of debt and they can’t carry another loan,” Carlin said Friday. “What we’re finding is the avalanche of material coming in every day leaves you numb. And some things announced haven’t even come in yet, like the wage subsidy.”

Moby’s Pub is one of the valued local businesses that does not appear to qualify for much help, including BC Hydro relief. Owner Dale Schweighardt said when restaurants and bars were ordered to close to the public he had just stocked up on perishables, anticipating a busy spring break. While he gave the produce away to staff, beer in the kegs will not be useable by the time doors open again.

“If social distancing is enforced for a lengthy period, it could mean the end of live music for a long time,” Schweighardt said. “I’m hoping restaurants will be allowed to do something by June or July — without the profits of summer it’s hard to survive the winter.”

Moby’s has not been serving take-out but Schweighardt said he may start doing so soon and will hopefully do enough business to continue until times are better. He is optimistic that will be the case.

Mouat’s Trading Company president David Toynbee said he has been working with multiple tenants of commercial units owned by the organization, and has been able to offer an arrangement to defer rent payments. Tenants can decide whether to tack the missed payment on to the end of their lease or to amortize it over the lease period.

The Canada Emergency Business Account provides a $40,000 zero-interest loan, of which $10,000 may be forgivable. Prime Minister Justin Trudeau announced Thursday the payroll eligibility requirement had been extended in both directions, allowing businesses that paid out between $20,000 and $1.5 million in 2019 to qualify.

Of the three financial institutions with Salt Spring offices, only Island Savings was able to provide data on the take-up. Credit union manager Jeff Knutson reported the local branch had processed 26 applications for island businesses for a total of $1,040,000 as of Friday afternoon.

Entrepreneurs who don’t qualify for the program or can’t afford to make use of it had been calling for help with their commercial rents, which was announced as another new support on Thursday. The program will seek to provide loans to commercial property owners who in turn will lower or forgo the rent of small businesses for the months of April (retroactive), May and June. Business owners will have to wait for the funding though, and many have already reported struggling.

“We’re willing to work with tenants to make it through this,” Toynbee said.

Mouat’s is feeling the crunch into its operations, as well. The Old Salty shop and Mouat’s Clothing have been closed — the latter with an entire shipment of spring and summer wear just arrived, now sitting behind closed doors.

Linda Koroscil has also shuttered her Love My Kitchen kitchen supply store, which she feels would be too risky to leave open with all those surfaces inviting to be touched. She is currently looking into which federal and provincial support programs she can apply for, but in the meantime has received relief from her landlords, Pharmasave owners Gary Utter and Linda Ramsey.

“I’m feeling very lucky. They’ve been incredibly supportive, as well as the Viponds, our management company,” Koroscil said. “I’m feeling positive that we’ll be coming back into some sort of normalcy at some point.”

Representatives for Grace Point Square and Murakami properties were contacted but did not respond before the Driftwood’s press time.

Carlin observed some small business owners can’t afford to pay rent later or even pay a portion of it.

“Many don’t have the ability to negotiate with their landlords in a positive way, and the landlords have to find a way to cover expenses as well. But we hope that’s not at the expense of the tenants, because we need these tenants to be here after this is all over,” Carlin said.

Carlin said a locally-created response program is critical, and fortunately many different island organizations have realized that and are working together on a plan under the COVID-19 Business and Farm Recovery Task Force. A campaign to support businesses by buying a gift certificate from a central website hub will be launched by the end of April, as just one effort at long-term support and eventual economic recovery.

Salt Spring residents can now self refer for COVID-19 testing