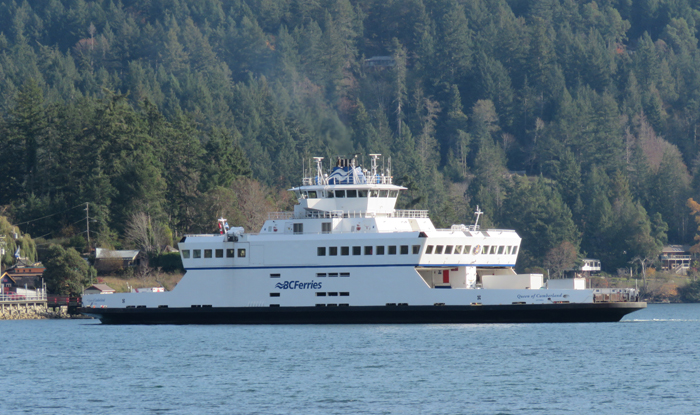 BC Ferries crews stationed on the Fulford-Swartz Bay route continue to work on making the Queen of Cumberland meet the schedule more than two weeks after the vessel replaced the Skeena Queen.

The Cumberland will be the main vessel serving the route while the Skeena undergoes a six-month mid-life upgrade, except for two weeks during the Christmas holiday season when the Bowen Queen will take over. So far the switch has received mixed reviews from passengers, with late sailings frequently occurring at peak periods when an on-board vehicle ramp must be employed in order to match the Skeena’s capacity.

Islander Chris Bradley has experienced the Cumberland being late on more than one occasion since the vessel change occurred and feels everyone on Salt Spring should be aware of the situation.

She said “it is doubtful” that people taking the 7:50 a.m. sailing from Fulford hoping to make the 9 a.m. connection from Swartz Bay to Tsawwassen will be successful due to the Cumberland’s struggle to maintain the morning schedule. It takes 10 to 15 minutes to deploy and load the upper ramp, she said, which automatically throws the schedule out of whack.

Other passengers who have had better luck catching less busy sailings have said they prefer the Cumberland’s lay-out, with one large passenger lounge and cafe service promoting more comfort and community between travellers.

BC Ferries acknowledges the change between two very different vessels has been difficult on some sailings. Strategy and community engagement manager Darin Guenette said Monday that crews are still getting fully accustomed to having the Queen of Cumberland on Route 4. On-time performance has improved, though, going from under 60 per cent during the first week of the change to approaching 80 per cent in the past week. Statistics show the Skeena Queen’s on-time performance was at 98 per cent for the month of October prior to the Oct. 28 change.

Issues for Salt Spring travellers who are trying to transfer to Tsawwassen through Swartz Bay were discussed at the Oct. 30 ferry advisory committee meeting. Guenette said crews have since developed a procedure where the first 20 or so vehicles that arrive at Fulford are loaded in stages near the front of the ferry’s main deck, which allows them to unload earliest and have the best chance of making a timely connection at Swartz Bay.

For more on this story, see the Nov. 13, 2019 issue of the Gulf Islands Driftwood newspaper, or subscribe online.