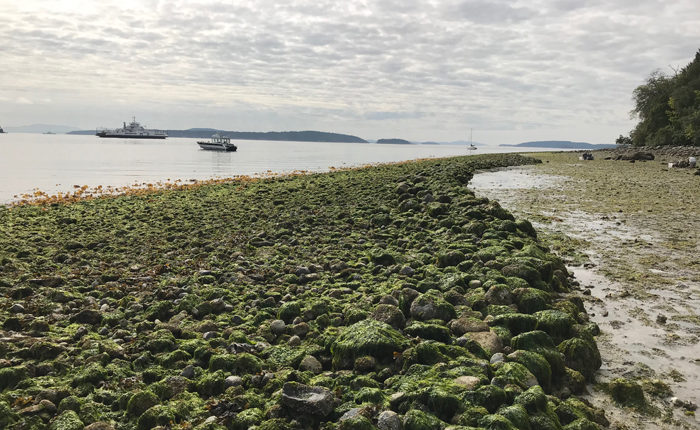 The clam garden wall located southeast of the Ruby Alton Nature Reserve, which stretches 800 metres long by 20 metres wide but is only visible during the lowest tides of the year. 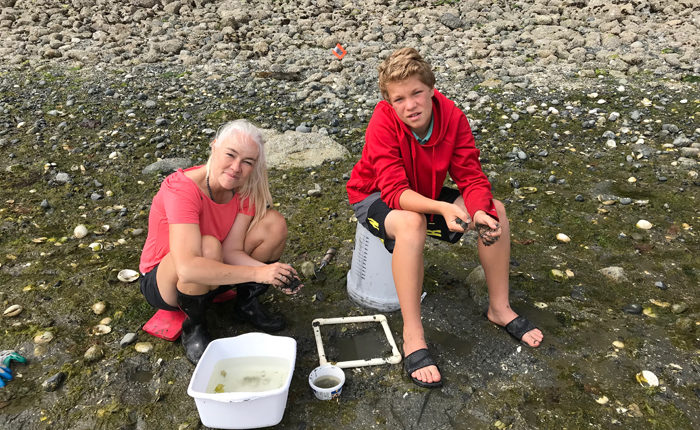 Volunteers Kelda Logan and Noah Logan sift through a 25X25-cm cube of beach material to aid a Parks Canada bivalve survey near the end of Fulford Harbour.
Prev 1 of 2 Next

Members of the public rolled up their pant legs and got their feet wet earlier this summer to participate in Parks Canada bivalve surveys taking place in and around the Gulf Islands National Parks Reserve.

Stretching nearly a kilometre in length parallel to the beach below Roland Road is a gently sloping, seaweed-covered rock structure. Visible only during the lowest tides, it forms a wide curb that boxes in a long strip of foreshore. When you know what you’re looking at, it’s immediately clear this is a constructed form. But without that knowledge, it would be possible to mistake it for a natural agglomeration of stones tossed up by the waves.

Nathan Cardinal, manager of resource conservation at Gulf Islands National Parks Reserve, said Indigenous clam gardens were virtually unknown to mainstream science until around a decade ago, although they can be found from the San Juan Islands up to Alaska. Carbon dating suggests the Fulford clam garden is at least 1,700 years old and one located just across Fulford Harbour at Russell Island is at least 1,000 years old. They are likely much older, and could have been actively managed for thousands of years.

Cardinal explained that clams naturally grow in just a narrow part of the intertidal area. By building the rock wall, First Nation inhabitants changed the shape of the beach and increased the optimal shellfish habitat. Stewardship practices such as aerating the beach also contributed. The protected area and artificial reef provided habitat for other food sources such as invertebrates.

Clams were a major food source for non-Indigenous islanders who lived on Salt Spring during the Great Depression, such as Ruby Alton, whose former home is just up the beach. (She bequeathed her property to the community as a nature reserve through the Islands Trust Conservancy.) Even before that, colonial rules banned Indigenous people from accessing their former beach territories, and so clam gardens were left untended for many decades.

Parks Canada’s five-year project is a collaboration with the Hul’q’umi’num and WSÁNEC First Nations to revive clam gardens in the Gulf Islands National Park Reserve. Under First Nations guidance, the forgotten clam gardens have become active sites involving youth and elders from 10 different nations. Many research facilities and universities in Canada and the United States have also participated.

“It’s been a process where it’s become a real place of learning for everyone, and a real way of moving forward with reconciliation,” Cardinal said, noting Parks Canada acknowledges that First Nations partners are the experts, and tries to work in a respectful and culturally appropriate manner.

The Fulford clam garden wall has now been restored along half its length, partly as an experiment on ecosystem health. Parks Canada surveys seek to find the difference between how clams are faring in the restored garden area compared to the unrestored section, and compared to other park reserve beaches without any traditional structures.

The monitoring work involves randomly marking 25-by-25-cm plots on the beach and digging down 25 centimetres in 48 locations to uncover the clams below. Parks Canada counts, identifies and measures the clams before placing them back in the sand.

Cardinal said Parks Canada is talking with its Indigenous partners about what they would like to see happen in the long-term. The agency will also analyze all the data collected and try to provide some recommendations to inform a new intertidal shellfish management plan.

For more on this story, see the August 28, 2019 issue of the Gulf Islands Driftwood newspaper, or subscribe online.