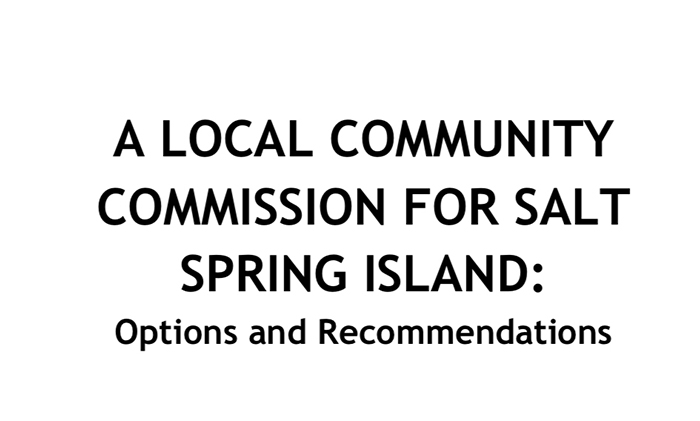 On Monday, May 9, Salt Spring CRD director Gary Holman released a discussion paper on the option of creating a Local Community Commission. What follows is his introduction and a link to the document itself.

One of my 2018 election platform commitments was to improve governance on Salt Spring, including seeking voter approval for an elected CRD Local Community Commission (LCC). This discussion paper initiates public consultation on the proposal, and will be available in several venues, including online (Salt Spring Exchange, Driftwood, social media), and hard copies at the library and local CRD office. This paper was drafted at my request by several members of the Governance Working Group of the Community Alliance organization, which was formed to consider governance improvements after the failed referendum on incorporation in 2017. The paper makes a number of recommendations regarding the composition, responsibilities, and remuneration of an elected at large LCC for Salt Spring.

The possibility of an LCC has been considered as part of previous governance studies undertaken during provincially-initiated incorporation processes. I’ve also outlined the LCC proposal in previous Driftwood articles this year (Feb. 23, Mar. 2), and in Local Trust Committee and ASK Salt Spring town halls. An LCC, along with the CRD director, would broaden our community’s elected representation and oversight of local CRD grants and services (e.g., budgets, bylaws, policies), and could lead to consolidation of Salt Spring’s four island-wide commissions (Parks and Recreation, Transportation, Liquid Waste, Economic Sustainability).

LCC commissioners would have a mandate from local voters similar to that of the CRD director. This means that local CRD-related decisions, recommendations and advocacy for our community of almost 12,000 — now effectively the responsibility of a single elected official — would instead be made by majority vote of the LCC and CRD director (effectively a “council” for CRD issues) in regularly scheduled, public meetings. The CRD director would still be directly elected to the CRD Board and the Electoral Area Services Committee, which oversee regional and sub-regional services.

The LCC discussion paper has been reviewed by CRD staff and by an advisory committee I’ve recently appointed, comprised of representatives of the four island-wide CRD commissions, Salt Spring Fire and North Salt Spring Waterworks improvement districts, and two members at large. This paper is not endorsed by CRD or advisory committee but is considered a good basis for public discussion and input. My thanks to the authors for their efforts in producing this well-researched document.

The advisory committee will make its own recommendations regarding the LCC, based on more detailed review and public input. The mandate, responsibilities and maximum cost of an LCC will be defined in CRD establishment bylaws that must be approved by the CRD Board and would form the basis for the referendum question to be put to voters during the October local elections. An LCC will require some local taxpayer cost, primarily for modest stipends for commissioners, who along with the CRD director, would oversee all local CRD services. However, some cost savings could also result from consolidation of commissions, while community groups and citizens would continue to advocate to an elected LCC regarding local priorities, projects and other issues.

While the Local Government Act allows a regional district to establish an LCC, voter approval is necessary. Holding the referendum at the next local government election on Oct. 15, 2022 will minimize the incremental cost of the LCC referendum. If voters approve, an election for LCC commissioners would be held in the spring of 2023, which will also require a onetime cost. I will be including LCC-related costs in the provisional CRD budget for 2023, costs which would be taken out of the final CRD budget for that year if voters reject the proposal.

Establishing an LCC is a relatively simple governance change compared to incorporation, with far fewer jurisdictional and financial impacts. Unlike with incorporation, roads and policing would remain a provincial responsibility, and land use would continue with the Trust. Therefore, establishment of an LCC could provide some governance advantages of incorporation (e.g., broader, more transparent representation and clearer delegated authority) without its possible downsides, such as the costs and future liabilities of Salt Spring’s extensive road network and concerns regarding potential weakening of the Trust mandate.

The LCC advisory committee, CRD staff and I look forward to reviewing public comments that can be made online and by emails to: directorssi@crd.bc.ca. Further opportunities for public input will be announced soon.