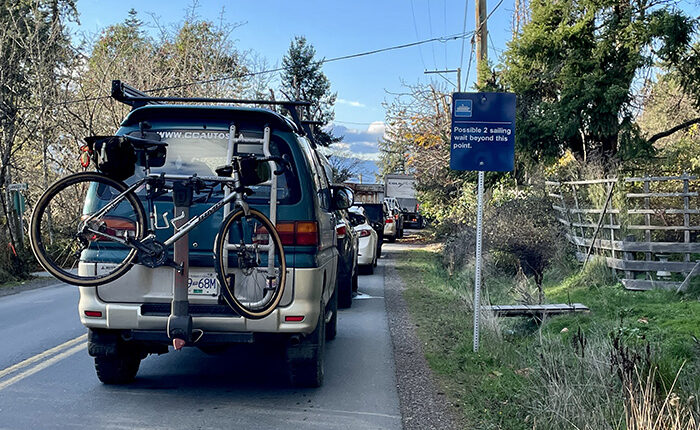 Community fed Up With Quinitsa and Wants Two-Ship Plan Sooner

BC Ferries has plans for the Vesuvius Bay to Crofton route that include replacing the Quinitsa and eventually bringing in a two-ferry system, yet the Salt Spring Chamber of Commerce wants to see those changes come much sooner than planned.

With long line-ups and overloads affecting the 20-minute route from Vesuvius Bay to Crofton (Route 6) from the summer into the fall this year, the chamber is asking BC Ferries to take another look at their forecasting and to bring forward plans to put two Island Class ferries on the route. BC Ferries says a shuttle service on this route is being considered for the mid-2030s and in the short term, a larger boat to replace the Quinitsa next year.

In 2019 the 52-car capacity Howe Sound Queen was retired from the route and replaced with the 44-car capacity Quinitsa. BC Ferries’ calculations at the time were that despite being a smaller boat, it would be more efficient to load, which would mean shorter turnaround times.

Yet the Quinitsa has been a source of complaints ever since it was put into service on the route. A ferry advisory committee (FAC) meeting in 2019 was dominated by complaints from residents about the smaller ferry and resulting line-ups in Vesuvius Bay.

“As a result, ferries agreed to put the 61-car capacity Bowen Queen on there in the summertime,” said Harold Swierenga, longtime chair of Salt Spring Island’s FAC.

Everything on the island is affected by the ferry waits, Martin explained. If the truckers bringing goods to the island have a two-sailing wait at each end of the route, that equates to four hours of an eight-hour workday.

“That’s half their day gone. So that means way higher costs and that will be passed on somehow; either the business or the consumers are going to have to pay the cost of that increased transportation,” Martin said.

Workers commuting both ways, people going for medical appointments, major treatments or surgeries, family connections and sports teams going off-island to compete are also impacted by overloads, as is business travel of all kinds.

“It just isn’t something that’s tolerable for a very long period of time,” said Martin.

Dayle Murray, manager of The Cottages on Salt Spring, told the Driftwood they recently lost a staff member who had been commuting from Chemainus.

“Having to wait one or two ferry waits on her commute caused her to look for employment elsewhere,” he stated by email.

The chamber will be approaching BC Ferries, Martin said, asking for an interim solution between next year and 2025. The bigger ask is for the ferry corporation to put a two-ferry system onto the Vesuvius-Crofton route as soon as possible and preferably by 2025.

BC Ferries’ executive director of public affairs Deborah Marshall confirmed that two Island Class ferries servicing this route is “one of the primary considerations for the mid 2030s.”

The ferry corporation recently had six of these new ships built to the tune of $50-million each. They are hybrid ferries, diesel and battery powered, able to carry 47 vehicles and 400 passengers and crew. Two are already in service on Northern Vancouver Island routes, and the other four will service routes between Gabriola Island and Nanaimo, as well as Quadra Island and Campbell River.

Putting these ferries on Route 6, where they would work in tandem and cross each other during busier times of the day, would also involve upgrading terminals on both sides to allow these ferries to charge. BC Ferries has written to the federal government to expedite setting up the power grid to be able to charge the ferry batteries overnight in their home port, Swierenga confirmed.

The assumption before the pandemic was to have the terminal overhauls happen somewhere close to 2028, Swierenga said.Background planning for the terminal work has been done by BC Ferries, yet COVID-19 and reduced ridership on ferries has BC Ferries “between a rock and a hard place,” he said.

“Ferries took quite a financial beating during COVID and a lot of the capital plans for terminal development and so forth have basically been put on hold until they do a re-assessment of what they can afford to do and what’s most needed in the short run,” Swierenga said.

Upgrading the terminals would also be needed to address the line-ups that stretch into the two communities on both sides, he added.

Martin agreed: “It’s not good for the community to have their road all covered with cars all the time.”

While many capital projects were on hold during the pandemic, Marshall confirmed that investments in terminal structures at all of Salt Spring’s three terminals are planned for the late 2020s.

The Quinsam a solution, for now

Perhaps welcome news for some weary Route 6 travellers is that the Quinitsa will be retired from the route this spring and replaced by the 63-car Quinsam currently serving Gabriola to Nanaimo.

“With almost 50 per cent more capacity than the Quinitsa, we expect the overloads we see at peak times to be greatly reduced,” Marshall stated. “With the introduction of a larger ship on the route, we are not planning to introduce two-ship service between Crofton and Vesuvius.”

With a flat deck and no weight limitations, Swierenga said he is optimistic the Quinsam will be able to do the job for a few years. Yet watching traffic trends, he added, the route will likely face issues within the next five years.

Predicting travel trends used to be more straightforward, Swierenga explained, often with new boats with similar capacities replacing old ones. Yet factors including demographic shifts and the changing nature of work mean that it is increasingly difficult to come up with a “perfect model” of what traffic demands will be five years out. And with ferries built to last 50 years, the difficulty increases.

Martin said the chamber will also be asking BC Ferries to redo projections done in 2017 that justified bringing the Quinitsa onto Route 6. The document stated that traffic growth on the route would range from an average of 0.37 to 0.62 per cent annually over the next 15 years. This would mean, the document stated, that the Quinitsa would be able to carry traffic without a sailing wait 78 to 83 per cent of the time. The report also noted that an additional round trip per day would offset the lower daily capacity of the Quinitsa compared to the Howe Sound Queen it was replacing.

“Instead of one per cent growth, between 2019 and 2021 we had 19 per cent growth in ridership. So they basically made a decision to put on a smaller ferry based on a model that’s just wrong,” Martin said, referencing traffic data that showed huge growth from the July-September period in 2019 compared to July-September 2021. “So just a completely different world than the world they forecast.”

Marshall referred to different numbers, using “automobile equivalents” (AEQs) to suggest Route 6 does not have a capacity problem. She said AEQs were almost the same in fiscal 2016 (from April 1, 2016 to March 31, 2017) and fiscal 2020 (April 1, 2020 to March 31, 2021). However, the latter fiscal year was characterized by lower traffic due to pandemic travel restrictions.

“Based on the [traffic demand] models, BC Ferries was going to have a plan in 10 years to put on a two-ferry system,” Martin said. “What we would like to see them do is to bring that plan forward. Rather than do it in a decade, do it as quick as possible, and I don’t think it’s possible to do right away because you have to buy the ferry, but I think it’d be reasonable to ask for 2025.”

The chamber does not purport to be experts on how to run the ferry service, Martin said, as it is BC Ferries that has the expertise, capital and resources.

“So what we’re saying is ‘here’s the problem, we know you can fix it, please fix it.’”

When asked to respond to the chamber’s request to bring the island class ferries on sooner, Marshall said many island routes are facing pressure from population growth.

“We are working with the provincial government to identify areas where additional capacity may be required in advance of planned vessel replacements,” she stated.

Gary Holman, Salt Spring’s CRD director, is among those wanting to see the two-ship plan on Route 6 sooner.

“We need to be more effective as a community to lobby the government to accelerate that plan,” he said.