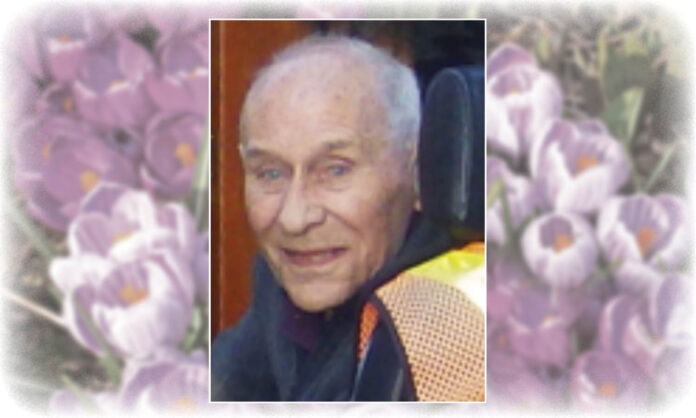 Ben was taken to Lady Minto Hospital on November 27, 2022 for final palliative care.  It was also his 70th wedding anniversary with the love of his life, Nel.

In addition to his wife Nel, Ben is survived by his sons Eric (Barb) and Norman (Tori), grandchildren Melissa (Mike), Logan (Megan) and Devin (Stacy), and greatgrandchildren, Nahlia , Teyven, Zarin and Hallie. He also leaves behind family in The Netherlands and the Okanagan.

After his father passed, Ben was much loved by his mother, her sisters and a friend of his father, who taught him to sail when he was 8 years old. Ben continued to enjoy sailing until arthritis made him stop at age 87.  He passed on his love of the water to his own family.
During WW2, Ben became involved with the resistance in Amsterdam. His group was betrayed and he had to go into hiding. After a year he could not stand staying hidden any longer. Outside he noticed a bicycle, hopped on it and went for a ride. He was caught when the German soldiers closed down both sides of the street. All men between 18 and 40 were put aside to be transported to labor camps in Germany. While they were marching, a commotion occurred at the end of column, which distracted all the soldiers. Ben instantly took advantage of the opportunity, threw the bicycle to the man next to him, and stepped out of the line. He saw a woman watching, took her arm and said “walk“. They walked for a very long time without further conversation until Ben was able to catch a ferry to complete his escape. He then went back into hiding until the end of the war. In June 1945 he joined the Canadian army in The Netherlands until his unit was taken over by the restored Dutch army.

In 1957 Ben emigrated with Nel and Eric to Canada. The family spent nine months in Vancouver, then they settled in Fort St John in northern BC and the adventure began. Norman came in 1959 and Ben worked hard to build a small shack into a house for his family.  Ben enjoyed hunting, fishing, skiing, skidooing and sailing. He helped to create a ski hill, and later a sailing club and a table tennis club. In 1982 Ben and Nel retired to Salt Spring Island, where once again Ben did most of the building of their new home. He loved being able to sail almost all year round, and enjoy his garden.

Our heartfelt thanks go out to all the dedicated homecare workers, Israel Cohen, Maureen the foot nurse, and the patient paramedics whose efforts allowed Ben to stay at home, being tended to by Nel, until almost the very end.  Thanks also go to the nurses and doctors at LMH, Cathy and Dr. Gorenson, and the staff at Haywards Funeral Services for their care and compassion during Ben’s final days and after his passing.

The family will be together later this summer to spread Ben’s remains.

“Write in sand the evil done to you.
Chisel in stone the good things done to you.”
~ Guido Gezelle