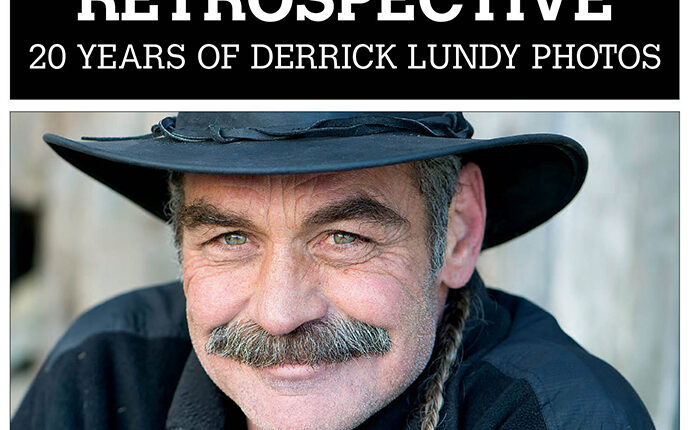 A man who was the public face of the Driftwood newspaper for more than 20 years died a day shy of his 65th birthday last week.

Derrick Lundy’s death on Nov. 13, only a month after being diagnosed with multiple organ cancer, has saddened so many in the community, including numerous past and present Driftwood employees who were privileged to work with him at some point between 1989 and 2011.

As former Driftwood publisher Peter McCully commented online last week, it was always a treat to see what images Derrick would bring to us each week. For practically all of my tenure with Derrick at the Driftwood, the first person to see his photos and choose which ones would be printed was his wife (and later ex-wife but always good friend) Susan Lundy. Even after I became the editor, Susan continued to do the paper’s layout for a number of years. She and Derrick were a brilliant team, and did some of the Driftwood’s best work in the glory years of print.

One of the first photos Susan would have seen one week in 2004 featured longtime islander Rita Dods clearly giving “the finger” to the photographer. Our beloved Rita had organized a special dinner for several couples who had been married for many decades. They had gathered at the Catholic Church hall, and Rita had arranged for Derrick to come and take a photo at dinner time. At about 8 o’clock that night, my phone rang at home and it was Rita wondering where the hell Derrick was. It turned out he had fallen asleep on the couch, so he quickly beetled over to the hall. After absorbing Rita’s wrath he of course got the photo for that week’s issue.

I was reminded of that story after his littlest brother Amos Lundy mentioned Derrick’s unique “sense of time” at the candlelight memorial for Derrick in Rotary Park last Wednesday evening.

“There was Salt Spring Time and then there was Derrick Time,” he said, among other expressions of endearment.

It’s true that Derrick could be easily sidetracked by anything that might arise, like helping friends or strangers at a moment’s notice, while on his way to take a photo or return to the Driftwood office. But if something went amiss he would always overcompensate with the next assignment or in some other way.

As our highly recognized and approachable “man on the street” Derrick was also often the first to hear about potential stories.

Derrick had a magical ability to bring out the best in the people he photographed; to put people at ease and win over even the most reluctant or uncomfortable subject. As both a photographer and a person, he made everyone he interacted with feel seen, heard and valued. It is such a rare rare gift.

In 2009, as Derrick approached the 20-year anniversary of taking photos for the Driftwood, Susan suggested we do a retrospective of his work. The result was a 28-page compilation of some of his best photos, including the many provincial and national award winners. A few of his photos are on this page, but we have also created a digital version of the publication for people to enjoy: to either be reminded of Derrick’s legacy as a photographer and chronicler of our island during those years, or to see it for the first time if you are a newer island resident. You can view it on our gulfislandsdriftwood.com website as a link to this story or under our Publications tab.

Derrick’s multi-branched family has understandably received so much love and support from the community during his brief illness and then death. We too send our condolences to everyone in Derrick’s family, from his long-time partner Sandra Smith, ex-wife Susan Lundy and all of the collective children, stepchildren, grandchildren and a great grandchild, his mother Lynn Lundy, surviving brothers, extended family and many people whose lives he touched in his and Sandra’s second home of Sayulita, Mexico, and around the world.