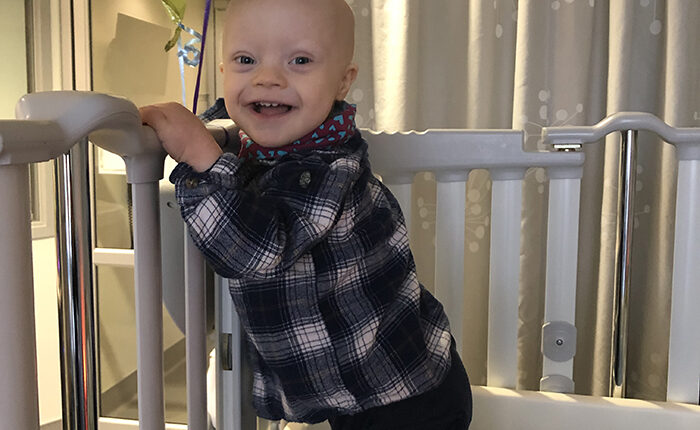 When reached at the BC Children’s Hospital Friday, mom Vidya Fisher said Kailash is in remission and doing great. They are waiting for his white blood cells to reach a certain count and then they’ll be on their way home. When he was diagnosed with acute myelogenous leukemia (AML) at the age of one, the community rallied, raising nearly $39,000 to support the family’s material needs as Kailash underwent treatment off-island.

“We had such an incredible outpouring of support from the community when we began this whole thing seven months ago,” Fisher said. “So I just wanted to send out a picture of him doing so well and let everybody know that we’re done, he’s finished and it worked.”

It’s been an almost unimaginable few years for the young family of four, who also saw their daughter Priya airlifted to Vancouver with severe injuries after she was hit by a tree during a windstorm in October 2020. Kailash, who was born with Down’s syndrome, also experienced a range of health challenges as a newborn and was diagnosed with a rare form of epilepsy called West syndrome, according to a GoFundMe page started by family friend Robyn Oakes.

“This has been a crazy couple of years for our family . . . looking at it, it’s hard to believe but we have two healthy children and they’re both just doing so well,” Fisher said.

Going through cancer treatment during a pandemic resulted in the family having to spend most of their time apart. Vidya and Kailash would be in Vancouver for a month at a time, with a week on Salt Spring in between hospital stays. Meanwhile, owing to pandemic restrictions that prevented siblings from staying in hospital, Priya and dad Jona remained on the island.

“Our family has been apart for half a year,” Fisher said. “It just kind of took us all by surprise and it completely changed our lives for a while here.”

“It was a really great birthday present that Priya got to come in here and we got to all celebrate together in the playroom,” Fisher said.

Young Kailash has been changing and developing as he undergoes treatment. When he came into the hospital he had no teeth, and now he has 10, Fisher reported, and he is starting to stand up and show interest in trying to walk. A lot of time was spent wandering the halls of the hospital with his mom, and Kailash always has big smiles for those he meets.

“He’s just an incredibly social and happy little guy. He’s won the hearts of all the nurses here. They’re all saying how much they’re going to miss him,” Fisher said.

Just over a year since the accident where then six-year-old Priya suffered a broken leg, a fractured skull and a brain injury, Fisher said her daughter is very physically strong and busy running and playing — just being her kid self.

Fisher said she can’t wait to get home and be together as a family.

“Basically we all just want to curl up in one big snuggle puddle. Just be together,” she said.

One thing Fisher learned from her time at BC Children’s is the immense impact that blood donors have for children undergoing cancer treatment. Kailash received many transfusions of red blood cells and platelets and “it’s an incredible thing that people can give and be able to support all these kids as they’re going through some big life issues here,” she said.

“I’ve talked to so many families here who are waiting for a match with bone marrow. If just makes me think, I can’t wait to go and offer that.”

Information about where to donate blood, with centres in Duncan and Sidney listed, can be found at https://www.blood.ca/en.