As British Columbia travels the COVID timeline along with the rest of the world, Salt Spring families who had babies just after the pandemic hit have a unique perspective on the crisis.

Emma Yardley and Daniel Squizzato welcomed their son at Victoria General Hospital on March 18, just as provincial orders on physical distancing and limited gatherings were coming into force.

Due to medical reasons they had an induction already scheduled. Staying in the hospital area in the days leading up to the birth, Squizzato said he noticed things starting to change. But while COVID anxiety and awareness was growing out in the world, it wasn’t something anyone wanted to affect Yardley’s birth experience.

“I was conscious about keeping that information out of the maternity ward room. The staff and nurses were great and kept Emma comfortable so she could focus on what she needed to do,” Squizzato said.

Charlotte Priest and Laughlin Meagher were also at Victoria General Hospital for the birth of their son, who was born on March 17. They left Salt Spring a week earlier for a stress test appointment as the baby was overdue, and planned to be home again that evening. When they learned the island midwives were over-capacity and would not be able to help, they decided to stay in the city with family. The changing rules on hospital visitors meant only Meagher could be in the room, so the doula they had planned could not attend.

“Laughlin was kind of wandering around the hospital that night and VIHA was talking about how they were going to ramp up their COVID measures so we convinced them to let us go home the next morning,” Priest recalled.

The family returned to Salt Spring without the help they expected to have. Priest’s father and his partner were planning to come and stay for up to a month but decided against it, and Meagher’s mother was going to fly in from Ontario. Her flight has been cancelled twice so far.

“It’s definitely impacted things because we planned to have family support for the first bit,” Priest said.

Follow-up midwife appointments have been done by distance, although Priest’s doula was able to come visit after she spent two weeks in isolation. As for more general visits, Priest was planning to basically self-isolate with the new baby in any case.

“It’s been a huge adjustment for all involved and I didn’t really want a lot of visitors. I feel like it’s been really good to have just the three of us for the first couple of weeks,” Priest said. “But now I’m at the point where I would kind of like to see someone.” 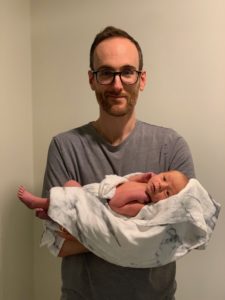 For Squizzato and Yardley, coming home from Victoria and immediately going into isolation with a new baby was not  so bad either, although Squizzato agrees some in-person visits would have been appreciated had they been possible.

“The strange thing is we have actually been better prepared for this than other people because we were already prepared to hunker down for a while after we came home,” Squizzato said. “It’s been tough to not have friends and other people come to see him but we have an abundance of people helping out in other ways, whether dropping meals off or checking in online to see how we are and offer support.”

Priest and Meagher have also found community support from afar, including a meal train organized by their doula. People have been leaving food in a safe tote in the driveway. While aware the pandemic has changed the world outside, Priest said she’s too busy with full-on baby care to read much news or to worry about anything. As well, her baby’s birth was actually a good model for the larger situation.

“From the moment we ended up leaving the island a week early, nothing went as planned. A lot of my birth story was unexpected change and just trying to go with it,” Priest said. “I feel like that’s what this whole time in the world is about. That’s what everyone is doing — trying to make empowered choices and not give in to fear or anxiety.”

Yardley and Squizzato have also found the two situations are strangely compatible, even though there is the added worry about COVID-19 risks in addition to the normal worries of new parents with a small human to care for.

“We already expected a massive change in our day-to-day routine, so in a way the timing has worked,” Squizzato said.

“We feel we are getting support. People in the community are getting the message about what needs to be done and I just hope that keeps up,” he continued. “Having a newborn reminds me that there are a lot of vulnerable people in this community, so the hope above all is everyone keeps working together and doing what they need to do for as long as it takes.”

Front line: A perspective from the grocery store