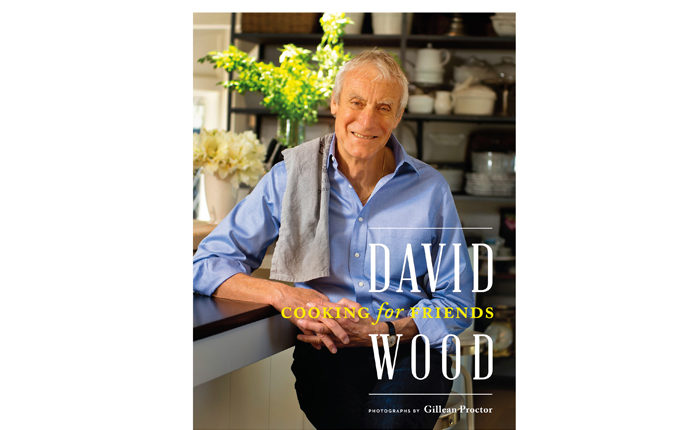 A new cookbook by well-known islander David Wood looks at his personal philosophy of food, and how food brings people together.

When writing Cooking For Friends, which is published by Whitecap Books Ltd., Wood took a different approach from his last two cookbooks. Those were written in the 1980s before he lived on Salt Spring and operated the Salt Spring Island Cheese Company, and were more collections of recipes. While Wood originally set out to write a “best of David Wood” collection, he quickly realized that times had changed since he last created a cookbook.

“It became pretty clear that the approach to food that everyone took back in the ‘80s has changed so completely in the 30 years since that it just didn’t make any sense to do a revamp,” Wood said. “I really had to go back to square one and think about the role of food for me . . . How do people use food? What is the point of food?”

He realized that more than anything, food brings people together. It gives people a reason to gather, to share conversation and to form lasting relationships.

The recipes included in Wood’s book attest to that. They are not revolutionary, but that was Wood’s intention. The book reminds people of the interesting things out there in the culinary world, without resorting to using technical skills and obscure tools to make the recipes work.

Wood only included recipes that he uses himself.

“They’re things I like to make,” he said. “They’re the basics of the way that I cook at home, from day-to-day stuff to more formal special events.”

Wood’s philosophy is based on three ideas. Food needs to be simple, the dishes need to complement each other, and they need to blend into the background, yielding to the more human element of connecting with the people in the room.

While the food should not be the primary focus of the evening, it is the focus of Wood’s book. The meals are beautifully photographed by Wood’s friend Gillean Proctor, who also lives on Salt Spring.

“Nowadays a cookbook goes nowhere unless people are wowed by the pictures. They’re not going to get past the first step if they don’t like the pictures in it,” said Wood.

Wood has built his life around food. He operated three food stores and a catering business in Toronto before coming to Salt Spring to make cheese. He has cooked for both his family and his friends through the years, and has realized that food is one thing that he can always go back to for comfort and for happiness.

“Food is an opportunity for pleasure two or three times a day . . . it is a great way to cement friendships and build new ones.”

Cooking For Friends was launched at a celebratory event at Fulford Hall on Sunday and is available in stores all over Salt Spring.

Nobody Asked Me But – Outwitting the flu virus a nasty business