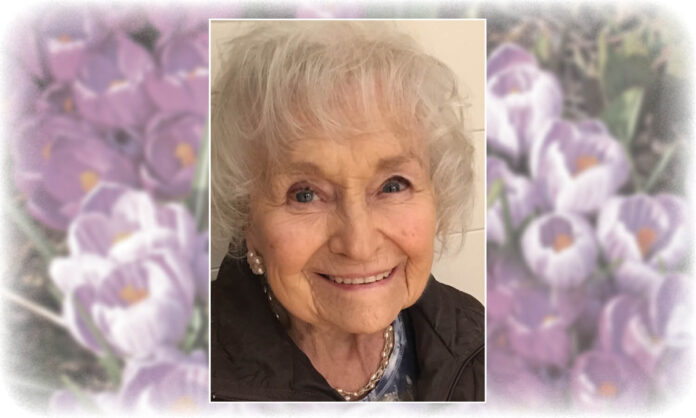 Our beloved Mother, Natalie Anne Jameski Horel, a few months from her 100th birthday, passed away on November 25th in the Extended Care Unit of the Lady Minto Hospital on Salt Spring Island. She was born in February 1923 to Anna and Walter Jameski in the original Lady Minto Hospital. She was the eldest of 4 girls.

She is survived by daughters Cherri (Vaughn), Glynnis (Dave), Wendy (Roger), Tarri, son Michael (Sharon), 9 grandchildren and 9 great grandchildren and her sister Bernice. She was preceded in death by our dad Chuck in 1998.

Natalie grew up during the Great Depression, attended the old Divide School in the Cranberry and graduated from high school in Ganges. After graduation she trained as a nurse at St Joseph’s Hospital in Victoria, later going on to obtain a specialty in Surgical Nursing at St Paul’s Hospital in Vancouver. Looking for adventure after the war, she joined TransCanada Airlines as a stewardess, based in Toronto.

She and our Dad Chuck Horel were married in September 1949 at Niagara Falls, Ontario. They lived in various places in Alberta and BC before returning to Salt Spring in 1956 and settling permanently.

Natalie was the ultimate mother, grandmother and friend. Her greatest joy was spending time with her family and hosting the many gatherings of family and friends. She was loved by all who knew her, opening her heart and home to all, first on the farm at Cusheon Lake and later at Beaver Point. She was known to host entire families, pensioners and others needing a place to stay. She was happy to include friends’ children who needed to spend time on a farm and frequently included them in family travel and vacations. She helped many a pensioner who lived in cabins along Cusheon Lake Road to maintain their independence as long as possible.

She was an avid gardener and her homes were graced with beautiful flower and vegetable gardens. Natalie was also an accomplished seamstress and knitter and the family benefited greatly from her skills. She wasn’t afraid to try her hand at demolition, carpentry, furniture repair or anything else that was needed by her or others. She was a beautiful soul.

We wish to thank her care providers who helped her remain in her home and lately provided additional care during her time in Extended Care. Special thanks to Diane, Marina and Josie, Barb for her van service, and the hospice volunteers for their vigil during mom’s last few nights. We would also like to thank Dr. Magda Leon and the staff of the Extended Care Unit of Lady Minto Hospital for her care this past year.

A celebration of her life will be held at a later date. Any donations in her name may be made to Lady Minto Hospital Foundation for the Extended Care Unit, or to the charity of your choice.