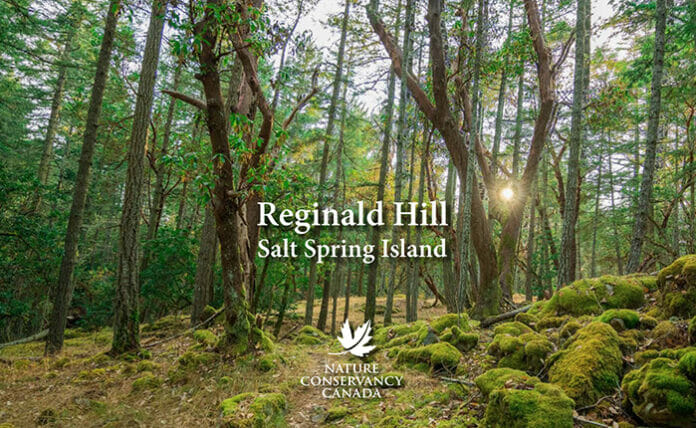 Salt Spring has an opportunity to preserve 400 acres of rare Coastal Douglas-fir forest with existing trails and connection to other important and well-loved protected lands.

Only $500,000 is left to raise for a $7-million purchase of the “Reginald Hill” acquisition. The preservation project is being undertaken by the Nature Conservancy of Canada (NCC).

Lesley Neilson, communications director for the NCC in B.C., said it is rare to have an opportunity to protect such a large chunk of land in the Gulf Islands or southern Vancouver Island.

“That the family had kept it intact, and now are very supportive of this conservation outcome, is just the best of what we all want,” said Neilson.

Many people know about and use the existing trails, although the NCC stresses people should not trespass on what is still private property.

Charles Kahn, author of Hiking the Gulf Islands, called the parcel one of the “most beautiful, environmentally sensitive and historically interesting” pieces of land on Salt Spring Island.

“It has extensive wetland, endangered species, incredible 180-degree views, and a wonderful network of trails on old logging roads,” said Kahn. “It is land that has been protected for many years by its limited access and the owners’ reluctance to part with it. NCC’s intention to buy it preserves one of the last of the island’s uplands, from development and for the public.”

Neilson said one of the exciting things about this project is that once the land becomes a conservation area, then the trails will be open for everyone to enjoy as part of a wider recreational area.

“Because it connects to the little regional park and other trails, I think it’s going to be such a great addition to where you can go walk on the island,” said Neilson.

NCC fundraising materials describe the parcel as having dense forest, open meadows, pockets of ancient Douglas-fir, arbutus and Garry oak, “harbouring many plants and animals that rely on this unique ecosystem for survival.”

The property was selectively logged in the 1940s, and some “eco-forestry” was undertaken in the 1990s.

“Despite past use, the ecosystem continues to support a thriving diversity of wildlife typically found in Coastal Douglas-fir forests,” according to the NCC. “Conserving this forest will allow it to continue to mature and build old-growth characteristics over the coming centuries.”

The NCC said one of the property’s prime values is that it is “largely surrounded by undeveloped land, including conservation covenants to the southeast, de facto protected properties to the east and reserve lands administered by the Tsawout First Nation Lands Department to the south.”

Neilson said the NCC is pleased with fundraising results so far and hopes the public will help the conservancy gather the final $500,000.

“We knew that there was going to be a lot of support for protecting this beautiful forest,” she said.

The fundraising deadline is Jan. 31, 2023. Donations — which are tax receiptable — can be made online through a portal for this project. For more information or alternate ways to donate, email bcoffice@natureconservancy.ca.

It takes a profound patience to grow things.  At every step there are countless moving parts to arrange, plans to lay out that take shape...

Island Pathways thanks transportation commission volunteers for efforts over the years

By JEAN GELWICKS Before the Salt Spring Island Transportation Commission (SSITC) is no longer and the transition into the elected Local Community Commission (LCC)...

Salt Spring Island’s Christmas Bird Count (CBC) numbers are in, and with a few surprises, according to organizers.  The 34th annual event, conducted this year...

BY ERIC BOOTH We all know Salt Spring has a housing crisis. However, few amongst us appear to understand the magnitude or complexity of the...