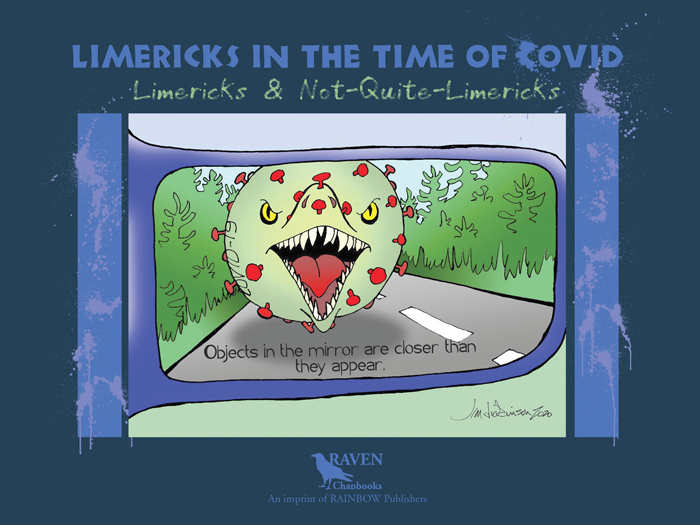 Humans have a strange gift in their ability to find humour in even the most dire circumstances, but putting together the world’s toughest challenge with one of its most irreverent art forms may seem like a stretch.

According to masterclass.com, a limerick is “a five-line poem that consists of a single stanza, an AABBA rhyme scheme, and whose subject is a short, pithy tale or description. Most limericks are comedic, some are downright crude, and nearly all are trivial in nature.”

Subjecting a COVID-19 situation rife with terrifying health and financial implications, anxiety and loneliness to a form meant to be silly could therefore feel like the wrong way to go. That’s until you pick up a copy of Limericks in the Time of COVID. The smart new book created through a partnership of ArtSpring, the Salt Spring Public Library and the Salt Spring Foundation has a way of lifting one’s spirits while bringing home truths of this pandemic year at the same time. And it just may foretell the long-term revival of an under-appreciated poetic form, with 78 unique submissions included.

“This is the first time we’ve done something like this: asked for art submissions and then overseen the creation of a book,” said ArtSpring’s artistic and executive director Cicela Månsson, who sparked the idea for the project. “There’s just so many people from the community who participated. I guess it was a way of making light of a difficult situation for everybody.”

The book, which will raise money for the Salt Spring Foundation’s COVID-19 Emergency Preparedness and Relief Fund, is indeed the product of many partners coming together for a common cause. While all submissions received were included in the book, there was also a contest element judged by writers Diana Hayes, Chris Humphreys and Kathy Page. Hayes, who publishes Raven Chapbooks, also helped create the book with designer Patricia Walker. Artwork was contributed by islanders Jim Dickinson, Susan Benson and Michael Whitfield, and photographed for production by Seth Berkowitz. The book was printed on-island by Contour Graphics and Bob Weeden contributed the forward.

Submissions were opened to people across the province during the summer, although many of the responses came from Salt Spring. Winners in the youth and adult categories were Shawn Yee and Lis Muise respectively, while Michael Oliver and Rosamund Dupuy were highly regarded adult runners up.

Hayes said each of the judges had a slightly different approach to their assessments, and brought different long-lists to the table. She was personally a stickler for staying true to form, although not all the entries did that precisely, which is why the book’s subtitle is “Limericks and Not-Quite-Limericks.”

In the end, though, the three judges were happy with their top three picks.

“Limericks are all about light-heartedness and having fun, and often a little risqué. People really dove into it,” Hayes said.

“I think a few of us were wondering just how risqué the submissions would get, and we were surprised the risqué ones were kind of limited,” Månsson confessed.

She noted the Salt Spring Public Library hosted a Zoom session where some of those were created, as participants egged each other on in a fun and creative on-the-spot challenge.

The collection in fact runs the gamut from cheeky to clever to somewhat melancholy. Some of the contributors are real wordsmiths who make the most of the form while managing to include keywords such as pandemic, 2020 and even Fluevog in their rhymes.

The standard limerick opener that goes “There once was a person from somewhere” interestingly inspired more than one person to choose Vesuvius for that place name. Many of the verses stick to the messaging around mask wearing. There are also references to public figures reviled (Donald Trump) and respected (Dr. Bonnie Henry).

Månsson said the team was hoping to get a statement from Henry to include in the book but weren’t able to reach her. They intend to send her a copy in any case.

“Hopefully she’ll get a little giggle out of it,” Månsson said.

The book itself was designed to reflect the limerick’s breezy form, cut short like some cartoon collections and nicely spaced with just two poems per page.

“You can create a mood in designing a book. It was a really fun project,” Hayes said. “I think it’s something the community will be really proud of and excited about. And I think this will be a bit of a collector’s item. It’s our first pandemic, our first limerick collection.”

ArtSpring covered the cost of printing the books, which came in at $15 a piece. The books are available until Dec. 17 on the Salt Spring Foundation’s website under “Give Now” for the minimum at-cost price. Ideally, ArtSpring will recoup its costs and there will also be added donations going to the foundation’s emergency fund.

Copies will also be available at Salt Spring Books. In that case customers will be charged the base $15 and are asked to make their donation directly to the foundation.

Bandemonium and Swing Shift promise no cancellation for Dec. 3 concert

SUBMITTED BY ARTSPRING Grammy-winning musician John Reischman brings his old master’s sense of tone, taste and musicality, along with his global reputation as one of...

two internationally renowned ensembles, Constantinople and Cappella Mariana, collaborate to present surviving compositions of Czech nobleman, traveller, humanist, soldier, writer and composer Kryštof Harantand introduce audiences to his literary tradition: his record of a unique trip to the Middle East which he chronicled in his book Journey from Bohemia to the Holy Land, by way of Venice and the Sea published in 1608.