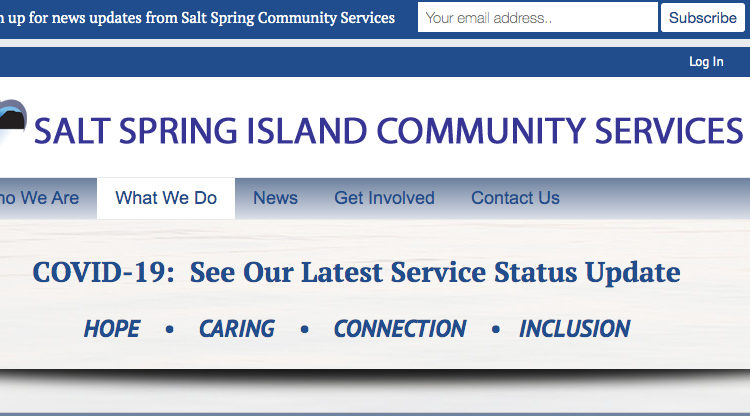 As the COVID-19 story unfolds around the world and more people face financial hardship than usual, local impacts are being felt at food banks and other food security programs.

“We’re seeing the beginning of an increase that could heighten as quickly or slowly as the epidemic itself on a local level,” said Rob Grant, executive director at Salt Spring Island Community Services. “It’s been a 10 per cent increase in the number of adults served in the last two weeks, but we are also responding to an increased need in the people served. The traditional food bank offerings for various-sized households have been supplemented substantially to alleviate the hardship of lost income.”

Pender Island is seeing a similar trend. Islands trustee Ben McConchie shared a report on March 25 stating a record 60 people had used the community’s food bank in the previous week, while no more than 40 people had ever attended in the past.

“Today there were 59 people — and it should be noted many different people showed up today from last week. The numbers could be even higher next week,” McConchie wrote in a community information post.

Compounding the challenges of increased demand on Salt Spring is the necessary adaptation of service to be in line with protocols for physical distancing. Grant said changes in long-established procedures for delivery of food security services at SSICS have been instituted that upend the regular workflow of volunteers and the use of space and create the need for supplemental services such as home and other location delivery.

All group meals and activities in the organization have been discontinued with some being replaced by take-out options. All efforts are being taken to minimize contact and create conditions conducive to social distancing among all staff and clients.

“The increase thus far is manageable,” said Grant. “What we’re doing is to prepare for the next wave of economic hardship as all indicators are that measures will need to be in place for some time to come.”

“There have been a lot of inquiries about how people can help,” he continued. “By far the best way to help is donating money. We have mechanisms to stretch the dollar further than the regular consumer and it avoids the necessity of disinfecting every item in a bag of donations, which is taking a lot of extra time for the dwindling volunteer base. Offers for donation of home cooking are a noble gesture, but our kitchens are bound to maintain knowledge of ingredients for dietary restrictions, as well as food-safe standards.”

People who are not traditionally the most vulnerable in the population may find themselves needing extra supports at this time, especially since so many are out of work and employment benefits may be yet to arrive or insufficient.

An important message from the Pender food bank coordinators, McConchie said, was “If you are in need, there is nothing wrong with using the food bank. Ever.”

Extra donations were being sought on Pender to help with the demand. The food bank was also accepting fresh food donations from island gardens.

As physical distancing can impact vulnerable people’s ability to travel, the Copper Kettle Community Partnership has started delivering food bank parcels to people on Salt Spring who are in isolation and cannot make it to Community Services.

“People who would never have called Copper Kettle in a million years are calling us, and they’re so grateful,” said nonprofit coordinator Cherie Geauvreau.

Copper Kettle volunteers are additionally bringing groceries to isolated people through a partnership with Country Grocer, which cannot otherwise offer deliveries. Those who would like to sign up for the service should call Country Grocer at 250-537-4144 to register and then call Copper Kettle at 250-537-5863 to arrange delivery. As of Friday, 12 volunteer drivers were on duty.

Creative folks make most of isolation