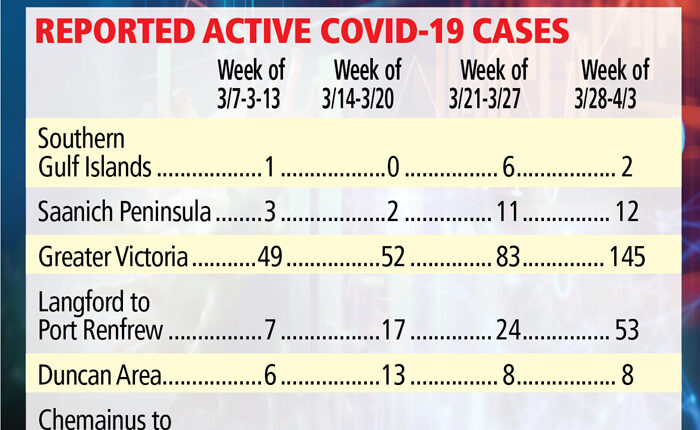 It was wonderful to see a decrease in COVID cases on the Gulf Islands in the March 28 to April 3 period in this time of a strong resurgence in British Columbia.  (See chart above.)

Nearby, Victoria and the communities from Langford west have experienced an alarming increase.  There were 198 cases reported for the week ending April 3.  In the prior week, the number of reported cases was 107. The Victoria, Langford, Colwood, Sooke area has never experienced this many reported cases in a single week.

British Columbia now reports 6,000 to 7,000 active cases each week as compared to February when the number was around 1,000.

Editor’s note: In light of information posted on social media last week that Salt Spring Island had seen a sharp increase in the number of active cases of COVID-19, we have posted the most recent data chart on our website, rather than waiting to publish it in our April 14 paper. The chart above shows the official active case number for the Gulf Islands as of April 3. We will post the new numbers for the April 4-10 period as soon as they are available. Thanks to community members Curt Firestone and Stan Derelian for doing the data compilation each week. Numbers for Salt Spring Island alone are not available from the BC Centre for Disease Control.