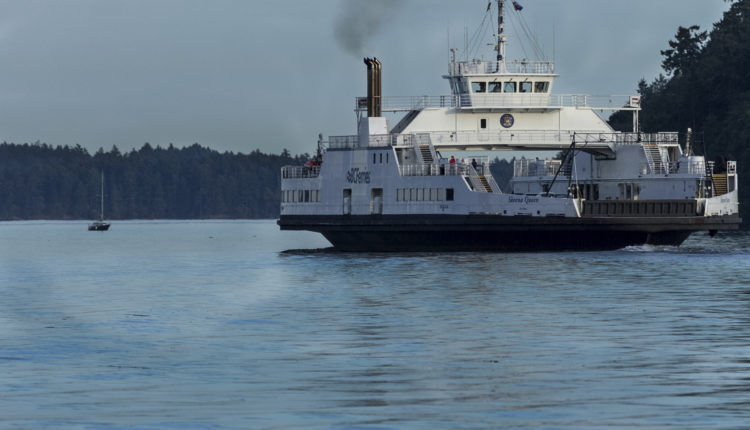 Fears that Salt Spring and the southern Gulf Islands would be over-run by visitors over the Easter long weekend turned out to be largely overblown, despite early indications that ferry traffic might be picking up ahead of the holiday.

BC Ferries communications director Deborah Marshall reported Saturday morning that reports of full ferries based on the reservations system did not show the true picture.

“We are seeing a huge reduction in the number of customers travelling with us,” Marshall said.

BC Ferries said Tuesday that traffic to the southern Gulf Islands from Thursday through Sunday was down 86 per cent compared to 2019.

Marshall pointed out temporary Transport Canada regulations mean BC Ferries can only carry 50 per cent of the normal maximum passenger limits. On Friday, the highest passenger count was seen on a 5 p.m. sailing from Swartz Bay to Tsawwassen, with 408 passengers or 39 per cent of the new reduced limit. That sailing was the designated through-fare sailing for evening connections to Salt Spring.

On the Fulford-Swartz Bay route, no sailing on the Skeena Queen had more that 30 vehicles and 44 passengers on either Thursday or Friday, or about 10 per cent of the regular full capacity on what are traditionally the busiest travel days. The Vesuvius-Crofton route maxed out at 20 vehicles and 30 passengers.

Marshall noted that despite calls to limit all ferry traffic to residents and essential services — which includes a petition signed by thousands —  it is not in the company’s capacity to do so without a provincial order.

Government officials and local associations did everything else possible to discourage visitors over the long weekend. While the provincial health officer urged people to celebrate the Easter weekend in their primary households and avoid inessential travel, BC Ferries schedule reductions to the Gulf Islands were timed to help prevent it. Service to Salt Spring’s Long Harbour terminal was cut for 60 days beginning Friday and the Southern Gulf Islands route from Tsawwassen saw additional reductions.

BC Parks closed all provincial parks ahead of the long weekend on Wednesday, April 8. While the Capital Regional District decided to keep its parks open for now, the local government body issued a plea for proper distancing etiquette so they could remain so. Local groups doing their best to let non-residents know this was not the time to visit included the Salt Spring Business and Farm Response & Recovery Task Force, which launched its Stay Home, Stay Safe campaign on April 8.

“The overall message is if we can stay this course, the sooner we can get back to business on Salt Spring,” said Islands Trust trustee Laura Patrick, who chairs the new task force. “We were proud to launch the campaign and get the message out, which was quite a consistent message with what the mayors of other communities were sending. It appeared to have worked.”

The Salt Spring Community Farmers Market Association had planned to begin market operations under B.C.’s essential services regulations on Saturday, with a permit to do granted by the CRD. The association board decided Thursday to hold off the opening and move the market back to its original Tuesday time slot beginning April 21, in large part because community members were concerned that tourists would confuse it with the regular Saturday Market in the Park. The food and beverage market will have strict physical distancing and hygiene measures in place to meet the provincial health officer’s requirements, but some were worried it would still be seen as an attraction that would draw visitors in.

Even as downtown Ganges remained quiet on Saturday and Sunday, some islanders appeared to be on hyper-alert. People living on Salt Spring reported being stopped at trailheads and parks by other islanders who demanded to see their identification. A Facebook post even went out suggesting islanders meet one of the ferries with pitchforks, and Pender residents received a similar call to action.

Patrick said she received many emails over the weekend from people concerned about outsiders potentially coming to visit.

“I understand people’s feelings but what’s important is to take care of yourself,” Patrick said. “No one knows the circumstances [of the people you see] so if you are concerned, steer clear. That’s the message of Dr. Bonnie Henry.”

Patrick said if people want to see further restrictions on movement it’s best to take that to elected officials rather than trying to police those restrictions themselves. Saanich-Gulf Islands MP Elizabeth May in fact brought the issue to Parliament on Tuesday during discussion of the Emergencies Act.

“Don’t take up a pitchfork unless you’re in your garden,” Patrick said. “And we’re not going to back down on the message to stay home. We’ll do everything we can to keep attention on this message until it’s safe for us not to.”