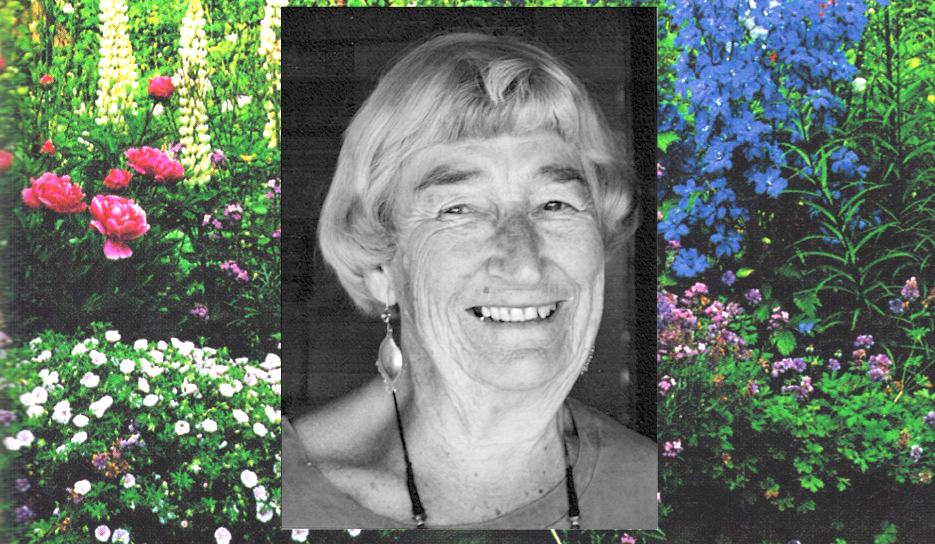 Josie Clement Lake began her long, richly experienced life as Josephine Rachel Feldwick on October 25, 1920. Her autobiography, Memoirs: How Lucky I’ve Been (2012), http://bit.ly/JosieMemoir  tells a vivid story of an acutely observant, shy young girl growing up in South London, with an older sister, Margaret, and (unusual for the time) a single divorced mother, Esther. Josie’s happiest childhood memories were spending the summers with her many cousins in the Surrey countryside. Coming of age during the WWII, she escaped the worst of the Blitz, and developed an affection for the bleak Orkney Islands where as a Wren she repaired aircraft in the Fleet Air Arm.

Shortly after the war, Josie married Mike Clement. They emigrated to Victoria, BC in 1949, building a new home and raising three children – Andrew, Ann and Ian.  In 1960 the family emigrated back to the UK, but soon found they’d become more Canadian than they realized. Within 9 months everyone returned to Canada, this time to West Vancouver.

Longing to continue her interrupted education, Josie enrolled at UBC as an undergrad in 1964. She found it an interesting and exciting experience. As well as thriving in her studies of English, History, German, and Sociology, she joined much younger fellow students in protesting the Vietnam War. Josie also became active in the anti-war advocacy organization Voice of Women (VOW) and the Canadian Federation of University Women, promoting social justice and making lifelong friends.

In 1970, Josie and Mike moved to Saltspring Island, and began the long project of turning their 1 acre Rourke Road waterfront lot into a magnificent garden. Josie also threw herself into weaving and community life more generally. Her first major tapestry adorned a Royal Bank lobby in Victoria for years. In the 1980s Josie served as president of the Community Arts Council and later felt honoured to be recognized as Life Member of both the Gardening Club and Weavers Guild.

Tragedy struck in 1987. On a business trip to Seattle, Mike suffered a heart attack and died at the Canada-US border in the shadow of the Peace Arch. A generous friend softened her loss by paying for Josie to attend Semester at Sea aboard the SS Universe for its round-the-globe undergraduate educational program. She made long-lasting friends among her small cohort of senior students.

Tales about how in 1990 Josie got together with her also recently bereaved neighbour, Philip Lake, vary. Was it simply chance, innocent encounters at their shared mailbox? Very likely crafty matchmaking by mutual friends played a key role. Suffice to say that after first contact their romance blossomed rapidly, just as Josie was about to take the difficult step of selling her home. Philip quickly proposed a better, transformative alternative. Within weeks they married, giving them both a new lease on life and launching decades of happy living together. Together they continued the garden building project with gusto, of course grumbling all the while about the hard work it required. The high point came in 2004 when the Canadian Gardening magazine featured a multi page spread on their achievement as part of a special issue on Salt Spring Island gardens. One photo shows the ecstatic couple almost swallowed up by a colourful sea of the flowers they had cultivated. Shortly thereafter, they sold the property, passing over the first offer and holding out for a buyer who would do the garden justice. Moving into Brinkworthy, they continued gardening, albeit on a more modest scale.

Josie remained healthy and active well into her nineties. But several small strokes and falls took their toll, progressively diminishing her physical and communicative abilities. She spent her final years under the loving, attentive care of Philip and his ’care angels’ – Jill F, and Barb B in the mornings and devoted team of care aids from Beacon Community Services at other times.

Josie spent her final days in the tranquil palliative care suite of Lady Minto Hospital. Attentive staff kept her comfortable while family gathered and friends dropped by to bid farewell.

Josie died peacefully on May 7, 2018 at the age of 97. In an elegant pine casket built by son Ian, we buried her four days later at the Purdy Cunningham Memorial Cemetery, next to Mike’s grave. It was a bright, glorious spring day.

In addition to her spouse of 28 years, Philip, and offspring, Andrew, Ann and Ian, Josie is survived by 4 granddaughters, Mila, Sarah, Julia and Malikaa.

A memorial celebration of Josie’s life will be held in mid-August. Those wishing to be notified of time and place, please contact Philip <balladoyle@shaw.ca>. In lieu of flowers, donations to the Saltspring Conservancy or Lady Minto Hospital Foundation would honour her.