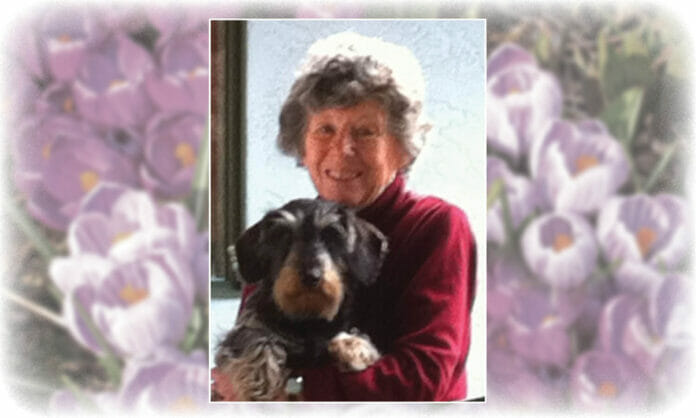 Betty was a devoted wife to Tony for nearly seventy years; a mother to three children: Wendy, Katharine and David,grandmother of five, great-grandmother of nine, scattered across Alberta, Australia and Salt Spring Island.
Betty was born in Vancouver and spent many childhood summers on Galiano, Gossip and Salt Spring Islands,though her family moved to Ottawa during the 2nd World War. She met Tony, a childhood friend of her brother’s, when he visited Ottawa one university summer holidays. They married in 1951.

She was an elementary school teacher and never lost her love of children and learning, which continued on Salt Spring with her long commitment to the library and the Arts in Schools Program.. Tony’s career as an RCAF officer meant many moves across Canada, Colorado and France. Betty particularly loved their time in France as they travelled widely, became fluent in French and made life-long friends.

Her love of horses began when she was two, when they lived in Colorado, she was finally able to have a horse of her own.

While in Colorado, she and Tony began to build a ten-metre sloop which was finished in the backyard in Scarborough, launched at Trenton, and for her maiden voyage, sailed down the St Lawrence to Shediac NB – complete with three children, two dogs and two guinea pigs. (The horse, who had also travelled from Colorado to Toronto and then Nova Scotia,, was trailered separately.) For three years home was an Annapolis Valley farm, where another four horses, another dog and a cat were added to the family. On Tony’s transfer to Halifax, they, with son David, started building Takuli, a 13 m cutter, to fulfill a lifelong ambition of ocean sailing. In 1976 the three of them, with another crew member, two dogs and a cat, set sail for the Caribbean, then through the Panama Canal, to the Galapagos Islands and across the Pacific to Hawaii before eventually arriving in Salt Spring. While still living on the boat, they began building their house on Sunset Drive, where Betty established a wonderful garden. For her 80th birthday, they started rebuilding a Nordic Tug to continue exploring the Gulf Islands.

One great source of pride for Betty was her success in the Baking Category at the Fall Fair. She routinely took home trophies and ribbons in many of the categories, right up until the last Fall Fair before Covid shut down the Fair for a couple of years.

Betty was a committed dog lover and was rarely without a dog in her life – from her first childhood Scotty to her last little Missy, now settled happily with her daughter Katharine.

Betty maintained her sharp wit and enquiring mind until the end and died peacefully at home with her family and the assistance of MAiD and Dr Holly Slakov. She will be greatly missed.