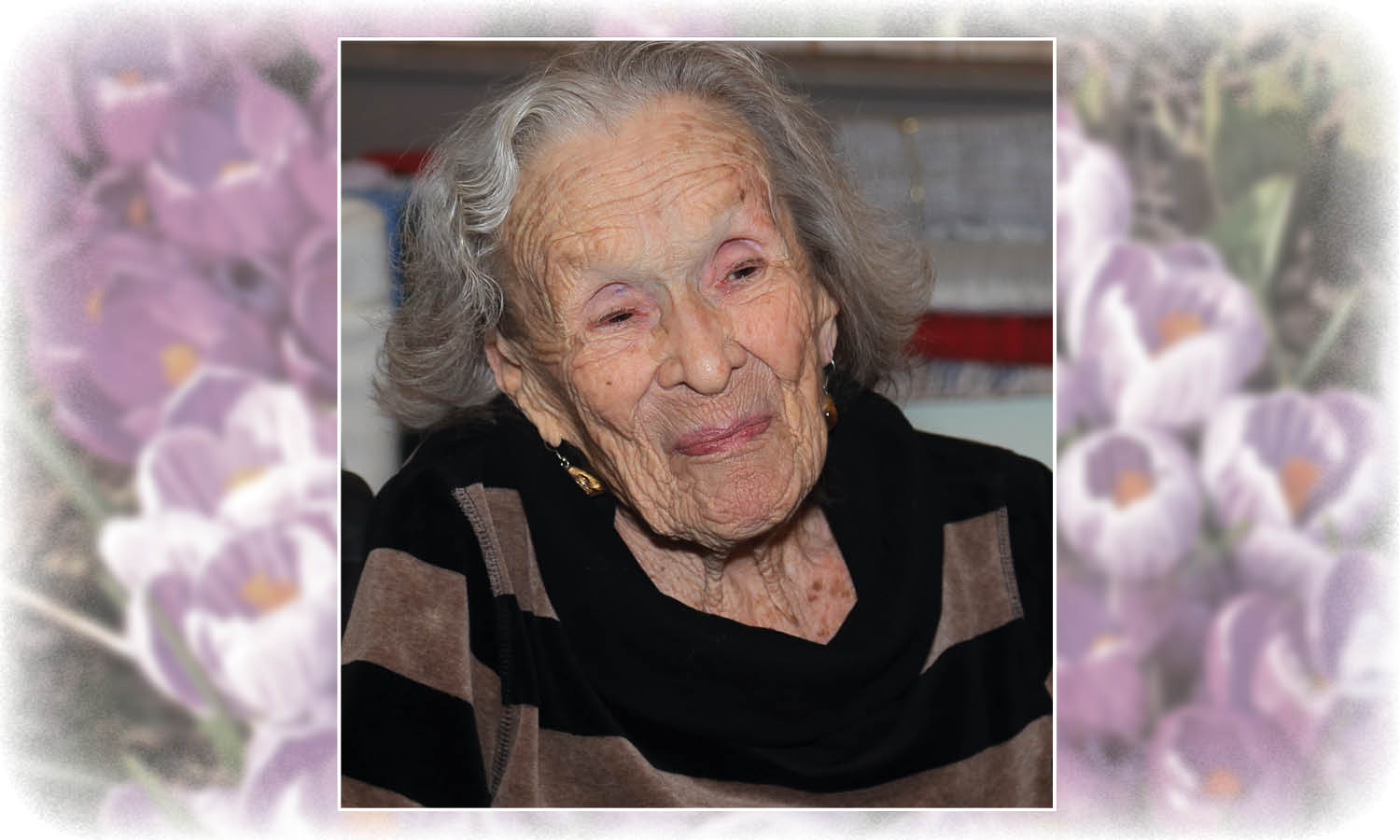 Nita came to the end of her long life at the age of 103. She fell a little short of her 104 birthday this coming September. Her family has agreed that their Mother, Grandmother and Great Grandmother will be given the benefit of a few days, and will be given, in memory, her 104 years.

Nita arrived on Saltspring Island from Prospect Lake and Victoria with her husband Buzz and 3 of their (to be 4) children in 1947. They arrived in a model T Ford on the ferry which sailed from the very small wharf at the end of an unpaved road surrounded by dark forest. The Cy Peck was the only ferry sailing from Swartz Bay to Saltspring in 1947. It docked in Fulford Harbour where the few cars that it carried drove off at a village consisting of Pattersons General store, a gas pump and a few scattered cottages. The families pet cat “Ginger” escaped the car and began her life in the “wilds” of Fulford while the saddened children travelled through the Fulford Valley and along empty small winding roads until they were coasting down the Fulford Ganges hill and into a slightly larger village of Ganges.

Ganges became, over the years, a bustling rural village but on that day was rather bleak, very empty and housed only the Ganges Wharf, feed shed, Mouats General Store, Saltspring Trading Company, 2 garages, the Cenotaph, a few small retail stores, the Tides Inn and Rita’s Restaurant. The sea filled the present day Thrifties parking lot and Post Office area. The sea also crept over the narrow road leading to Mouats Store when tides and wind sent it flowing over the road. The side streets feeding into Ganges were residential with cottages and tidy gardens behind picket fences. The population on Saltspring was 2500.

Nita’s husband Buzz [Alfred Martin] was bringing his family to Saltspring where he was to be the new Provincial Governments Municipal clerk, Assessor and Tax collector. Buzz was also to manage the same for the outer Gulf Islands, issue drivers licenses, marriage, burial and fishing licenses. His office was in the 2 story old white boarding house sitting beside Mouats Store.

After settling in to her rented home Nita enrolled the school aged children at the Saltspring Elementary and High School. The building held grades from one to 12 and enrolled 325 students. Mahon Hall was the gym used by students while across the road was a logging dump.

Rural living on Saltspring in the late 40’s and early 50’s provided all kinds of experiences for the family. Nita slowly became involved in her new community and, over the years, while raising her children became active in outer island pottery and craft classes. This, over time developed with a small group of friends into Art Craft. Today Art Craft is a very vibrant organization with many talented artists showing their work at various venues and culminating in a summer show in Mahon Hall.

Nita, with her friend Kay Booth conceived and developed the Hospital Auxiliary Thrift Shop. They began with $250, space in Mouats basement and a portable sewing machine that was used to mend donations. Today the Thrift Shop is run by many volunteers and contributes $180,000 to the Lady Minto Hospital. Many people benefit from this small beginning.

Both Nita and Buzz were to become eager participants in many community events and organizations. Buzz became involved in the Chamber of Commerce, improving ferry service, the Golf Club and establishing Ruckle Provincial Park. Golf, fishing, badminton and Sea Capers were events that Buzz enjoyed. He always entered the walk-the-greasy-pole-event. It provided many laughs for islanders, his children and later his Grandchildren.

Nita and Buzz also contributed to the island-style social life by organizing and participating in island Masquerades that were heavily attended, [Fulford Hall] eagerly anticipated and always involved a great deal of hilarious behaviour and outrageous home made costumes.

After Buzz retired Nita started her Cottage Tea Shop in Mouats Mall. She spent many happy days serving her friends, family and tourists. Grandchildren loved to drop in when they were visiting the island and eat as many butter tarts or fresh blackberry pie as they wished. Nita’s friends enjoyed the daily gossip and the “laced” tea that she served from a tea pot on festive occasions.

Nita is predeceased by her husband Buzz and son, Lyle.

She is remembered fondly by her 3 children, 11 grandchildren and 18 grandchildren. Nita lived a full life and leaves behind many accomplishments and a great many memories.

Nita’s family would like to thank the angels/staff of Extended Care, who were her caregivers for almost 4 years. They each and all showed great care, love, compassion and patience.

The family will be spreading her ashes in fondly remembered locations on her island home of many happy years. A memorial bench will be placed in the village outside her tea room and will provide another pleasant spot to sit and reflect on how sweet island living can be when you participate, contribute and savour with friends, community and family.