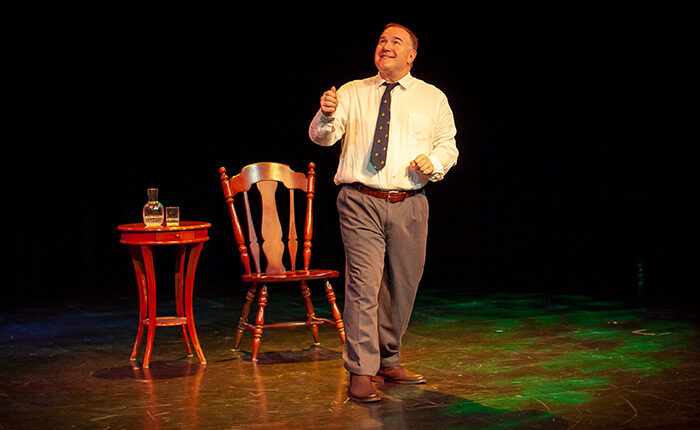 The first part of Jeffrey Renn’s one-man play At Your Service gathered many fans over its two-year journey at ArtSpring. Performed several times — initially as a rough cut at the end of a creative residency — the play saw additions and fine-tuning each time. (Its fourth run in October included a full 15 minutes of new material). Ardent fans attended each production knowing that they’d find something new, and word-of-mouth recommendations for this sparkling show were exciting to hear.

If you’re anything like the team at ArtSpring you’ll be eagerly looking forward to the next instalment, here for three nights starting Nov. 30. Renn picks up the story of Robert Service’s youth in the countryside of Scotland, and the early influences that ignited his passion for language and adventure.

Jeffrey Renn was set on the path of adapting Service’s autobiography, Ploughman of the Moon, by actor and mentor Douglas Campbell, with whom he worked over 20 years ago. Handing poetry-loving Renn a copy and uttering, “I think there’s something in here for you,” Campbell provided the initial spark which led to the play’s creation. While studying for his masters in directing at UVic, Renn wrote the first half hour, and was again encouraged to keep going by his professor. And the final push came from Cicela Månsson here at ArtSpring, who supported the play’s development with creative residencies and programming in our ArtSpring Presents seasons.

Renn is particularly interested in the grand adventure of Service’s life, a life that at times seems too good to be true. The man who left office work in Scotland to be a cowboy in the Yukon, who was in turn a spy, an actor alongside Marlene Dietrich, and who lived out his life on the French Riviera, makes for an alluring character to chronicle. Luckily for us Renn sees this fantastic life as a seven-play span — and we can’t wait to see how it unfolds.

Please note, as per the current public health order proof of full vaccination is required for everyone age 12+ attending this event. Patrons age 19+ are also required to show a piece of valid government photo ID. Masks must be worn at all times while at ArtSpring for those aged five and older.