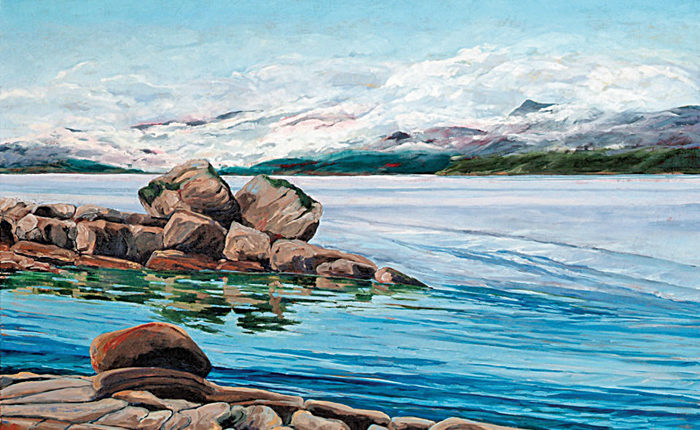 Celebrated authors share their love for the Salish Sea islands

Island dwellers hardly need to be convinced they live in a special place, but a new collection of writing put out by Salt Spring-based Mother Tongue Publishing will resonate equally with readers who wished they had more island time and those who have made one their home.

Love of the Salish Sea Islands contains many a delightful ode to those individual rocky outcroppings that lie between B.C.’s southern mainland and Vancouver Island. An amazing cast of award-winning contributors share their personal connection to these spaces in poetry, memoirs and essays, set off perfectly by landscape paintings by acclaimed Salt Spring painter Nicola Wheston.

The entries often catalogue the islands’ natural beauty, or give a history of how a good place to visit became a beloved home, but the contributions also delve into a more complex contemporary relationship with place. This relationship is both informed by the past and cognizant of an uncertain future, as development pressure, ecosystem loss and climate change threaten to change the Salish Sea islands along with the rest of the world. The book is perfectly current with modern concerns, as the book features new, original pieces rather than anthologizing suitable past works.

One of the first things readers will notice is just how good the writing is. Starting with the introduction by Driftwood editor Gail Sjuberg, the book offers a textured immersion into the archipelago. As Sjuberg notes, the inhabited islands have similar cultures and landscapes, yet each community is absolutely unique.

Many of the writers acknowledge the Indigenous people who made their homes among the island for thousands of years. They make a point of including pre-colonial names and meanings, and tell the stories of the friends and mentors who are still very much a part of the picture. As Stephen Hume writes in his essay on Saturna, life on the islands is like a palimpsest, a “parchment on which a previously erased or obscured text can be read through what’s written over it, the old story mysteriously revealing itself behind and underneath the new telling.”

The authors are arranged alphabetically by surname, which means Indigenous writer Taiaiake Alfred has the book’s first entry. Alfred’s essay grounds the collection with his experience of hunting deer on WSÁNEC territory — known by settlers as Tumbo Island — with his young son and friends from the Tsawout Nation. They decide the name Temosen is more appropriate.

“Being on Temosen is powerful salve on the soul scarring caused by the discontinuation from nature and each other that marks the everyday existence we all endure. It is medicine, and our visits are a kind of ritual reclaiming, renaming and represencing to strengthen our spirits so we don’t completely lose ourselves under the constant pressure of whiteness bearing down on us,” Alfred writes.

In the following piece, archeologist and scholar Chris Arnett also talks about how Indigenous history imbues the islands’ spirit, even if modern settlers are not aware of it. He gives a humourous yet thoughtful account of more recent island culture, where a dog’s funeral threatens to be “very saltspring” and not in a good way, but teaches a surprising lesson in the end.

Longtime North Pender resident William Deverell breaks down his community’s social hierarchy — one that will be familiar to most other Salish Sea residents as well. Moving to the island from Vancouver in 1979, Deverell was a high-profile lawyer, not part of the wave of back-to-the-landers and “blissed-out hippies.” But like many, he immediately felt he’d found his home after visiting the Gulf Islands, and now finds 40 years have passed.

“The reward for my staying power is that I have finally attained the lofty rank of old-timer,” Deverell writes. “There is a higher class, to which it is hopeless to aspire, of seniors born or raised here. And there are several levels of lesser nobility: full-time residents, weekend cottagers, visitors, vacation renters and, of the lowest rank, the yahoos who think it’s okay to bomb around on country roads tossing beer cans and plastic wrappers.”

The contrary challenges and joys of making home on an island after moving from the city comes through two delightful poems by Denman Island’s Matsuki Masutani.

“It shatters me to think how many times I have escaped serious consequences by chance,” he writes in At Midnight, which ends with the beautiful image of northern lights, shimmering in a green curtain across the night sky.

Salt Spring’s Derek Lundy moves outside the human domain in Water Makes Islands, recounting a healthy respect for the surrounding Salish Sea and the dangerous rocks that emerge from it while recounting some sailing adventures. Diana Hayes summons another evocative version of this thrilling dance in her poem I Was Never a Sailor. The sea is portrayed both as a balm and as a potentially terrifying end by two writers connected to Protection Island. Nancy J. Turner recounts the perfect joy of the rowboat as vessel, while Maria Coffey learns to overcome a past near-drowning with daily swims in the Salish Sea.

Islands less transformed by human development also get their due, from Christina Johnson-Dean’s memory of needing to carry all groceries to Gambier Island via water taxi, to Alison Watt’s tribute to Mitlenatch Island, an uninhabited park reserve and bird sanctuary.

With its references to happy summer trips, ocean swims and blue skies, Love of the Salish Sea Islands makes for perfect summer reading. It’s easy to imagine reading a selection or two in the ferry lineup on the way to a new adventure, or a return visit to a beloved place. It’s also the kind of book islanders will want to keep on their own book shelf, to lend out to visitors but also to return to themselves again and again.